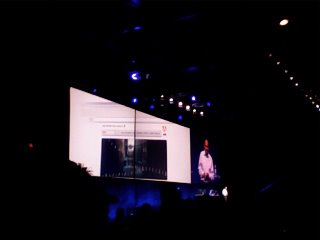 During the morning keynote we were treated to a performance by the Blue Man Group. Think heavy metal music with magic tricks, art and paint. Lots of paint. Mostly blue paint.

Shantanu is giving a great keynote speech right now. He also issued a challenge to everyone here to try and solve the Semaphore puzzle on the roof of the Adobe building in San Jose. No one has solved it yet. There are several observations on this blog for anyone interested.

Shantanu also re-iterated Adobe’s aim to bring the internet to more than 1 billion people in China and India via cell phones. Kevin Lynch then kicked off a series of demos including new integration between Dreamweaver and Photoshop. As a former web head, this is a huge improvement in the workflow most webmasters go through. The workflow also includes the Spry Framework for AJAX (very cool). Spry makes AJAX easier for website designers.