In this episode we explore LiveCycle ES including demonstrating an AIR Client written by Jorg Knippschild on Adobe in Munich. Dave Liao and Vlad Ghelesel from Ensemble Systems are interviewed and discuss trends in LiveCycle ES development including coupling Flex and AIR. The Code and Tunes segment features great high-quality Imperial metal from my good friend Kurt Phillips' band Warhag.

The code samples will be uploaded to duanesworldtv.org later.
Posted by Duane Nickull at 4:06 pm 1 comment:

WTO Talks Collapse - this affects EVERYONE!

I was deeply saddened to read the following from the BBC website this evening:

"Marathon talks in Geneva aimed at liberalising global trade have collapsed, the head of the World Trade Organisation has said.

Pascal Lamy confirmed the failure, which officials have blamed on China, India and the US failing to agree on import rules. EU Trade Commissioner Peter Mandelson said the result was "heartbreaking". The talks were launched in 2001 in Doha and were seen as providing a cornerstone for future global trade.

The main stumbling block was farm import rules, which allow countries to protect poor farmers by imposing a tariff on certain goods in the event of a drop in prices or a surge in imports."

This is very serious. You might not think it affects you but this does. I worked with the United Nations (UN/CEFACT) as a vice chair to remove barriers to global trade for close to 6 years. I saw many things that were beyond change and a lot of things that could be changed. There was doubt of course, after all, who am I (a mountain biker/musician / tech guy) to help the world and defend those who cannot help themselves. Luckily I killed that small voice in the back of my head and dove in deep and felt I have caused change.

The failure of this round of talks on farm subsidies and farm tariffs means we are all going to pay more for food and people in some countries are going to die because they have no food. I have pinged Avaaz.org to get a petition started to bring to Pascal Lamy to urge the member nations to get back to the table and remind them that every day they stall, people die. Statistically, people have died because of failures in world trade in the time it takes you to read this blog.

If you see a petition from avaaz.org, please sign it. Stop this madness.
Posted by Duane Nickull at 7:13 pm No comments:

Fellow evangelist Lee Brimlow just built and posted a wicked tutorial on using Action Message Format with PHP. I think it is one of the best ever online tutorials on this subject. Lee takes you through the high level overview, then the server side AMFPHP and finally the client side code. You can access it here and see Lee's blog here. It is easy to code along with. 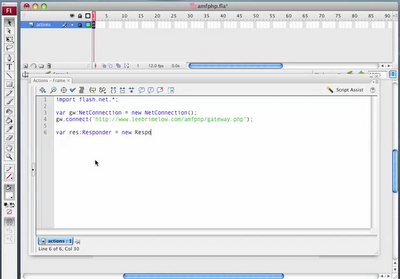 The following video is a simplified version of the Duane's World episode 1 Web Services AS3 code generation wizard. The source code for this is available here alongside other code samples. If you want the more thorough explanation of what is going on, the Duane's World 1 show is the best place.