This is a very focused video tutorial to help developers understand the basics of X, Y, and Z axis rotations of graphical components while programming in Flash Builder 4 (Flex 4 framework) and using AIR.

Posted by Duane Nickull at 1:08 pm No comments:

While many people were focused on the iPhone announcement yesterday, a bigger story was emerging. Both Google and RIM not only joined the Open Screen Project, but RIM and Adobe announced they will bring support for Adobe's Flash Player to the Blackberry platform. This is a huge story for business users as RIM is still the SmartPhone of choice for many business users.

Via the OSP, 19 out of the top 20 mobile handset manufacturers are now collaborating with Adobe to integrate Flash technology into their devices. MAX's mobile story gets even better when you consider Adobe and Nokia are jointly announcing the funding of more than 35 multi-screen applications as part of the Open Screen Project Fund.

Now to go and teach the 4 hour AIR/Flex Boot Camp!

Posted by Duane Nickull at 11:22 am No comments:

So today at Adobe MAX a huge announcement came out. We now have special tooling that allows you to use the Flash Platform to build applications for the iPhone. Flash developers will be empowered to use their existing skills to construct applications for iPhone that can be distributed through Apple’s App Store. No promises but the betas of this (CS5) should be available by the end of this year.

This caps a long running stealth like program code named "notus" within Adobe. While we just announced this today, there are several apps available today via the App Store. There are details published at adobe.com/go/iphone.

Does this mean iPhone supports Flash? No. Apple has not yet announced support for Flash on the iPhone. So what does this really mean? It means there are hundreds of thousands developers who can use their existing skills to build iPhone apps via CS5. From a consumer/user perspective, these applications appear and work just like any other iPhone application. Users cannot easily determine which applications were built with CS5, native objective C code, or even using something advanced like Nitobi's PhoneGap.

Will we use this exclusively? No. Many developers use whatever makes them productive. Another major announcement today was the addition of an iPhone mobile client for Adobe LiveCycle ES. This was built using objective C. Developers who have ActionScript skills though will be able to build applications using a language and IDE they are familiar with and not be forced to learn another application programming language. This is huge IMO and will help both the Apple and Adobe developer ecosystems.

Adobe has not yet made any breakthrough WRT to getting Apple to put the Flash player natively on the iPhone. I don't work with the people who are having the talks but I get the feeling (mine - not necessarily the truth) that Apple and Adobe haven't made much progress on this front. I do know there are tons of people who want this so I am not sure what is going to happen. I have heard that much of the issue is licensing. By the same token, PhoneGap also ran into issues with licensing. I hope Apple listens to their developers.

I am going to build an application later this month to try it out. In the meantime, if you go out and build one, please leave a shout here to tell others.
Posted by Duane Nickull at 9:59 am 2 comments:

Adobe Evangelists (this list is not complete so please add yourself via comments and I will check back and update). List is filed in alphabetical order by handle (except Ted who likes to use non-alpha numeric characters).

Every MAX is come with a belief that I will achieve at least 5 hours of sleep per night. Inevitably, the one last drink turns into two then suddenly it is 2:00 AM and sleep is limited to less than 4 hours. Normally I just roll with the punches but today I really wished I had been up an hour earlier to do the entire LiveCycle ES training. I missed the first hour. This class is nothing short of excellent! 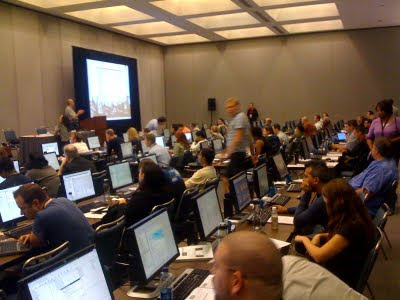 The room is SRO with 80 strong in attendance. This session has more attendees than Russell Brown's Photoshop session! This goes to show that Adobe's enterprise story is stronger than ever and starting to really pick up in the mainstream.

Oh - if you're not coming to MAX, you can still get the materials from the course. Stay tuned here for more updates. Gotta get back to Workbench now.