LiveCycle Tracks at Max are busy 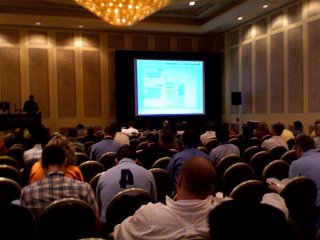 Okay - who would have believed this a few weeks ago. The LiveCycle tracks at max are filling up. The photo above is from Sanga's LiveCycle 8: What's coming talk this AM. Despite a late start due to the general session running over, the talk filled up. The lunch hall was filled to boot!

have to run and prepare for two back to back talks - first one I have to build our new XMP SDK 4.0 in xCode on the Mac to demonstrate the functionality. My C skills are a bit rusty. Later, Christoph Rooms and I are doing our first talk on LiveCycle Security Architecture.
Posted by Duane Nickull at 1:09 pm