I am here for Web 2.0 Berlin, probably the most important technical and social conference to hit Europe this year. I don't just say this lightly either. As someone who has worked as a Vice Chair for the United Nations, I see the social impact of Web 2.0 as the single most important thing affecting people within the European Union. Web 2.0 is not just about computing and technology. It is about the migration to the web as a platform upon which democracy prevails, where people with common beliefs find each other, and where new ideas become reality.

Some themes that a year ago might have seemed radical are happening. Video formats on the Internet are now better than most people's home TVs. (Note - when you get to this URL, make sure to click on the lower right hand side icon for full screen view. You WILL NOT believe your eyes.) When you think that the average person can buy an HDTV (the H.264 codec) video camera and editing software for under $2000, this means that anyone can have their own TV channel.

So what else is Web 2.0 about? CNN news is recruiting ordinary people to videotape questions for US presidential candidates on YouTube. During the recent Lebanon-Israeli conflict/war ordinary citizens blogging about it were getting their versions of the events out just as fast as the mainstream television networks. A single opinion about a bad customer experience with a company that lies to its customers like Rheem can circle the globe in one day and result in a loss of revenue based on their mistruths.

Web 2.0 is affecting the very social fabric in which we exist. Those who figure out what it is and how they can use it prosper. This conference is about finding that truth. I will be speaking on a topic that brings the matter closely into focus. The session is scheduled for Wednesday at 9:00 AM and is titled Web 2.0 Design Patterns, Models, and Analysis. The abstract describes it as follows:

Duane will also show the evolution of the client server model into a 5-tier model based on the consistent concepts of most successful Web 2.0 patterns. The model serves as a useful starting point for anyone either designing business models or technology for Web 2.0. The Web 2.0 model is also used to illustrate a reference architecture. This abstract set of technology components allows developers to start thinking about the types of technology decisions required for building Web 2.0 projects.

The conference is full of the best Web 2.0 speakers in the world. O'Reilly has truly put together the best of the best for Europe. I urge anyone who can to come to this show, as it truly is a global phenomena and understanding what Web 2.0 is all about can be really useful.

I also look forward to newspaper interviews with some of Europe's most prestigious newspapers - Die Welt and Die Zeit. As I write this, more are being arranged and I hope they come through. 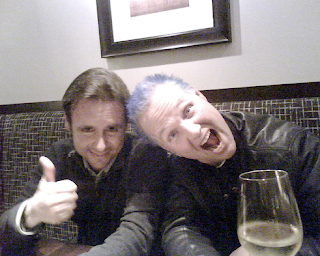 Charlton Barreto and I have been working hard on some new collateral for LiveCycle in the context of SOA and enterprise architecture.

The work has been stressful and resulted in some behavior patterns most often associated with those who still think COBOL is cool. Nevertheless, stay tuned for some really new stuff on SOA.

Photo courtesy of Andre Charland (Nitobi).
Posted by Duane Nickull at 9:20 am No comments:

I have watched in dismay in the last months as I have been forced to accept the same connections via LinkedIn.com, Plaxo, Facebook, MySpace, Mix2r.com and a number of other social networking sites.

Why can't someone build a portal using the XFN (XHTML Friend Network) microformat to allow these connections to be only declared once. Then an API can federate it to all sites wanting to declare this sort of information. James Governor wrote a piece for the O'Reilly Web 2.0 Design Patterns book on the Synchronized Web being a core pattern of Web 2.0. It looks like these sites are really failing in that they are not getting it together fast enough.

Maybe I will start one now. How should it work?

When you accept a friend request from any site, it also allows you the option to "federate" the declaration. This means that any other site can pick it up. Of course, this will require the sort of Sxip-ish OpenID infrastructure in place to make sure the identities match.

Entrepreneurs - please take this idea and run with it. If you feel really nice, give me some shares but please save us all time and effort by making this automated! Hey - if you really like it I'll be your friend on the system.
Posted by Duane Nickull at 9:03 am 3 comments:

Video Interview of myself and James Governor on RedMonkTV

In this RedMonkTV episode, James Governor and I discuss the upcoming O'Reilly book Web 2.0 Design Patterns. If the video below does not work, try this URL:
http://www.ditii.com/2007/10/28/web-20-design-patterns-book/

Music 2.0 is a new way of making music. Like the early beta in software, where users can participate long before the gold copy comes out, Music 2.0 is about getting people involved in the creation process. Mix2r.com is a platform that gives artists the ability to allow that collaboration and each participant can retain full control over their own licenses of their content.

I am involved in a project on Mix2r.com that requires some input. If you are a musician, please consider this one. 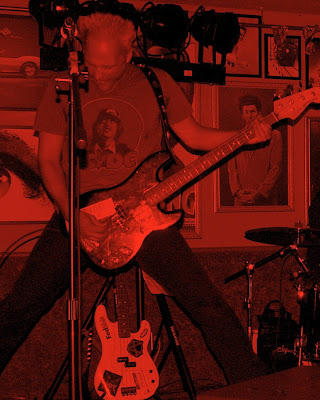 My alternative band 6th Avenue Nightmare just posted a song called 16 Bottles on Mix2r.fm. The URL to listen or download it for free is here http://www.mix2r.com/node/821.

Here is what we want. If you are a guitarist or play any other instrument that you think might sound good on this, down load this song, then use your recording software like Ableton Live, Pro-tools, Garage Band, Cubase, Adobe Soundbooth etc. and add in a track (or tracks) of your own. When you are finished mixing it up, re-upload it as a derivative work of the original song. You can do this by clicking on the link "derivatives" in the top right hand corner as shown below: 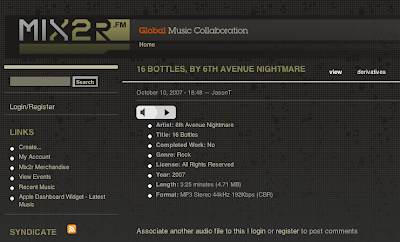 If you are the first, you will see a screen like this:

Click on the link that says "Upload your own derivative of this work". NOTE: you must first have an account to do this. They are free.

Once you have done that, you will be prompted to upload your derivative work along with making some text notes about what you added, your license (for your content only - you cannot override the existing base tracks licenses) and who you are etc.

This song is going on a CD one day and we would also be really happy if anyone submitting tracks could indicate if they are willing to allow their content to be used on the CD.

In addition to this song, there are tons of gigabytes of free music available for both download and remixing. Have fun!!!
Posted by Duane Nickull at 10:54 am 2 comments: