Well here I am, back home from MAX 2006. The event was killer! Tagged with the Marketing slogan "Beyond Boundaries", it turned out to be so pulling that we never made it "Beyond the Hotel". So what was the biggest pull? The LiveCycle Birds of a Feather was cool (yes - my boss John H. will shoot me when he gets the bill for the beers I bought for everyone) but Apollo was my favorite. Being on the inside at Adobe is cool. Really really cool. I get first dibs on new technology and get to whip up samples to test. Watching Mike Chambers at Max 2006 was inspirational. He is soft spoken and very humble while showing us potentially the coolest of the cool.

Apollo is an internal code name for an application framework that uses flash yet does not require a browser to render like Flex Applications or Flash (*.swf) files. Apollo applications use a parent container as a frame that will eventually be able to

The MXML file above can be compiled alongside an "application.xml" file that declares the pieces to the application. In this case, it is simple and there are only two files. The end result is the *.air file which renders in Flash but skinned as a complete application. 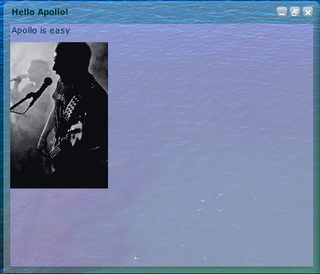 Flex 2 is cool but sorry - I think Apollo is gonna be *way* cooler. If you are coming to Web 2.0, stop by the Adobe booth to say Hi and I'll give you a quick demo of Apollo.
Posted by Duane Nickull at 2:32 pm