After working on this for a few hours more I decided to release it into the wild.  It is available in the Android Marketplace as "Magic Screen Pro".  The application is basically a freehand drawing application that allows the user to select line thickness and color.   This is a sample screenshot of the app: 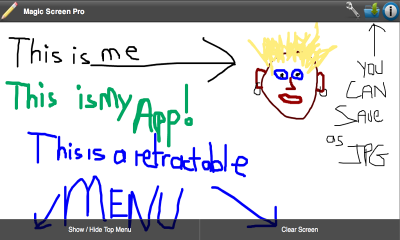 This app has several new features not seen on many other Flex/AIR mobile applications.  First, it features the ability to save work as *.jpg files.  For some reason this sometimes sticks on the iPad.  Secondly, it has a unique color picker custom component for mobile.  I published this component separately here.  It also accesses the camera roll so you can add background images. 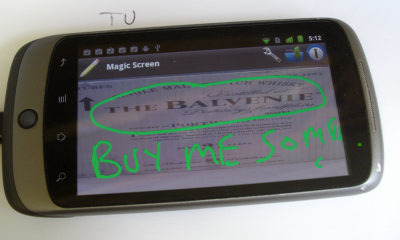 There is no way I have found to flatten two layers when one supports a transparency channel though, so you can only save the drawing.

The source code for this app is hosted on my band's website at
http://www.22ndcenturyofficial.com/ForBlogDoNotDelete/MagicScreenPro.fxp

I have been debating how to write this message for a while and finally decided to make a brain dump to this blog and on the Google list.

As many of you know, Adobe has decided to retire the name LiveCycle for what would have constituted the ES3 release.  The new release is called the Adobe Digital Enterprise Platform (ADEP).  The Document Services side of the product itself will be very familiar to LiveCycle developers and components such as the server, WorkSpace and WorkBench/Designer are all present and well built.

*******UPDATE*******
Adobe LiveCycle is BACK as a brand name!  For information on how to get the Adobe LiveCycle ES3 download, click here.  I no longer speak for Adobe however it appears that Adobe has returned to using the LiveCycle name for the product again.  Uberity Technology Corporation has also added a new section for LiveCycle Professional Services and LiveCycle Consulting.  I am glad the LiveCycle ES name is back
*********END*********

The great news is that it is available for download now!!!
http://www.adobe.com/devnet/enterprise-platform.html

This leaves a quandary for the user group lists and I am going to make a suggestion.  There are two relevant lists for LiveCycle ES developers that will be affected as well as a new list for ADEP developers.

The first is the official Adobe LiveCycle Developer list.  This has well over 10,000 posts and is a great group.  For the last 5 years, a second list, the LiveCycle Developers List on Google's platform has been a community owned list and helped introduce thousands of new developers to LiveCycle.  We set this up originally as a community list based on a suggestion during a "Meet the Team" event at Adobe MAX in 2006 when it was disclosed that the then current LC lists were not working well for everyone.  There are hundreds of code samples and file downloads, all of which will available until August 31, 2011 (Google's limitation, not ours).  Please understand that this group is not an Adobe group, it is owned and run by the community. It is not any single person's decision to kill the group or move it.   I have moderated it and tried to keep spam from reaching members but it is not my list.  To re-iterate however, the official Adobe LiveCycle ES list at http://www.adobe.com/support/livecycle/ is also a wealth of knowledge.

Adobe has placed a huge emphasis on the developer knowledge exchange experience and has already set up a new list for ADEP users.  The ADEP Developer program is now open for business at http://www.adobe.com/devnet/enterprise-platform.html.  It also has a brand new list (URL below).

While it is not my decision, here is what I will recommend.

All developers moving on to ADEP (a.k.a. LiveCycle ES3 and beyond) should sign up for the new developer center.  You can sign up at http://forums.adobe.com/community/adep (I made my first post today!). We want to avoid duplication and make sure there is a single consistent place to ask technical questions and be informed of new events etc.   PLEASE:  do not use the existing LiveCycle lists to discuss ADEP topics as this will lead to fragmentation of knowledge and duplication of effort.

While not my decision, I believe we should leave the existing LiveCycle Developers list on google until it becomes unnecessary based on low traffic or low membership.  It is important to recognize that not all customers will move on right away and I am not going to suggest we close the list as it still provides an important function.  While this list does somewhat duplicate the official Adobe LiveCycle lists, I know many of you have found it to be a great resource and nothing will change.  I will personally remain on that list as well.  It might be prudent to move over to the official Adobe list to consolidate the knowledge base into one area.

The last item I want to encourage you all to do is to consider downloading ADEP from the http://www.adobe.com/devnet/enterprise-platform.html site and attend Adobe MAX this year to learn all about the new features in various hands-on sessions.  We have put a lot of work into this release and it also communicates with the software formerly from Day Software.  There are architectural documents at the new ADEP developers center to explain how this all works.  I have a new course on ADEP that will teach you how to get started, which will be shared on the new ADEP list.

Thank you for all being part of this great ride and I hope you will jump on board with ADEP and continue to learn more!  Sometimes it is hard to let something you have grown and nurtured wither over time.  I urge you to look at the bigger picture and the fact we are all part of the coolest tech community on the planet.  Long live the "LiveCycle/ADEP" developers!!