At this year's MAX conference, LiveCycle will be making an even bigger impact. This partially reflects the fact that LiveCycle developers are being sought in record numbers, but my personal opinion is that LiveCycle is the future of enterprise computing. Not many people are aware that Adobe is an SOA & BPM vendor, but we are. My own company was acquired in 2003 for a service registry-repository. We are not only an SOA & BPM vendor, but a mature vendor to boot. Several key analysts following this space have given Adobe LiveCycle ES some of the greatest reviews ever, but I digress.

The main reason I wanted to make this post is to make sure that people know this is where they can go to get training on LC ES and also receive in depth product knowledge transfer. I also want to let you know that there are huge discounts available for registering early for this at MAX 2009. Register for this by August 10 and receive US$200 off the regular price of a full conference pass.

The program itself is for enterprise developers and combines 1.5 days of introductory preconference training on LiveCycle ES (Enterprise Suite) with a full conference pass to MAX 2009.

The preconference lab, "LiveCycle ES: Building Rich Engaging Applications," is an essential introduction to developing user-centric applications with Adobe LiveCycle ES. LiveCycle ES allows both business and IT professionals to visually assemble end-to-end processes, which when combined with rich interfaces, create engaging applications that unify systems and people quickly and flexibly. We'll present an end-to-end use case bringing a rich Internet application (RIA) and a LiveCycle application together. You will learn about the LiveCycle IDE, the Admin User Interface, and the LiveCycle ES solution components as we guide the participants through the development of this comprehensive use case.

We strongly recommend this training to those new to LiveCycle ES, or those who would like a refresher, in order to get the most value out of the more advanced LiveCycle topics that will be presented during the MAX event. 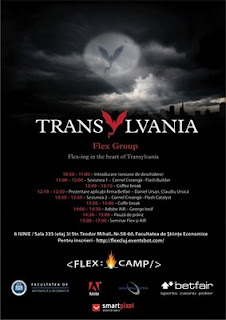 Posted by Duane Nickull at 3:17 pm No comments: