OSMF was started over a year ago to simplify the development of media players by allowing developers to assemble components to create high-quality, full featured video playback experiences. Key service providers such as Omniture, Akamai, Conviva, Eyewonder and many others have completed plug-ins or submitted code to be included as part of OSMF. OSMF 1.0 also supports the latest Flash Platform initiatives such as Flash Player 10.1, Flash Access 2.0 and HTTP Dynamic Streaming.

In addition to this fully tested, production ready version of OSMF, the team also posted the first prerelease of Strobe Media Playback. Strobe Media Playback is a compiled swf that allows a web developer to get up and running quickly and easily with an OSMF based media player. It basically will look and render the same in every browser (One of the issues with HTML5 video I have worried about is the problems for web developers to ensure a consistent look and feel across all browser/platform combinations and maintain it over time). The out of the box player looks like this: 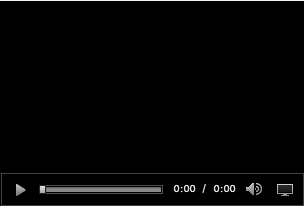 The team has created a interface that gives the customer a terrific “out of the box” experience. Every group at Adobe who is interested in an easy to use web video experience should talk to the Strobe Media Playback team. The team is working to make SMP even easier to use through a hosted version that can be integrated on a customer’s web page as easily as an HTML 5 video tag, but with much more power and flexibility.

Have a great weekend!
Posted by Duane Nickull at 2:54 pm 2 comments:

Please visit https://www.adobe.com/cfusion/entitlement/index.cfm?e=lces2_sp to download Service Pack 1. Additional details on the contents of the service pack, including the issues it addresses and installation instructions are included in the Read Me file available at the same URL. A file extraction utility such as WinZip/gnu tar/unzip will be required in order to extract the files prior to running the installation.

The direct link to the Service Pack download is http://www.adobe.com/cfusion/entitlement/index.cfm?e=lces2_sp.

You can also access the download from a few locations on LiveCycle DevNet pages:
1. Downloads tab: http://www.adobe.com/devnet/livecycle/index.html?view=downloads

2. Get It section on the Get Started page: http://www.adobe.com/devnet/livecycle/get_started.html


Be sure to review the Release Notes
Posted by Duane Nickull at 10:51 am No comments:

Bloodied but Unbowed: As real as it gets

During my time working with Adobe, I seem to keep getting drawn into the movie business crowds. Our creative tools seem to be a favorite amongst many film producers who in turn are always super enthusiastic about showing us the awesome new ways they have used them for special effects, turning movies into truly interactive experiences and more. Celebrities such as James Cameron (Avatar), Peter Beyak (Extreme), Colleen Nystedt (Exhuming Mr. Rice) and others seem to be genuinely stoked about our technology and what they can do with it. Once in a while, I am blessed with the opportunity to meet someone from the lucky group of people who are living their dreams. Translation: working on something you are truly passionate about = living your dreams. Yesterday was one of those days.

I had the immense pleasure of having lunch with Susanne Tabata. Susanne is an accomplished film producer (just Google her name for a plethora of credits). What I am most impressed by though is that she is so real for a person who has just released what is destined to be a one of a kind documentary film chronicling the pivotal years of early punk rock in North America. While the film "Bloodied but Unbowed"starts in Vancouver, BC, it weaves tentacles outwards, and the effect of the Vancouver punk movement from 1978-1981 is still influencing artists globally as told by people like Randy Rampage (DOA, Annihilator, Stress Factor 9) and Duff McKagan (Guns & Roses, Velvet Revolver, Jane's Addiction). According to Alternative Tentacles, the Vancouver sound pulled out a "Yeah, that's the shit!" from the likes of Jello Biafra, Henry Rollins, The Red Hot Chili Peppers, Sonic Youth, John Doe, Randy Bachman, Dave Grohl, Pete Seeger, and many many more! As someone who played bass for Stress Factor 9 with Randy in 2007, I can tell you the sound is still relevant. My own band still embraces this stylistic sound, which is ingrained into the song "Howie the skid" (not yet released). 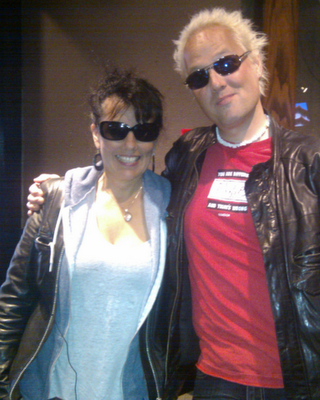 Susanne Tabata (on the left, yeah that is as obvious as it gets)
Here is the bad part now. I haven't seen the film. Like me, there are thousands of people who would die to see this (all screenings were select and sold out in advance). Susanne did confide in me during lunch that there may be a flash screening (short notice, one time shot to see it). If you want to get the invite, you best be logging on to Bloodied but Unbowed's Facebook and Twitter pages and keep watching for the invite.

Tom Harrison, the Provinces rock critic and a tough cookie to impress ( he still won't review my last CD ), writes:

"The film is more like a memoir based on key figures and what they said then and now. I applaud that. Initially, I feared it would take a journalistic angle - the "us versus them" slant. That's a familiar battle and not only tiresome but narrow. This was a widespread cultural phenomenon, not merely a musical one. The story is told from a punk point of view with a brief explanation of what started it and hints of what ended it.
Ultimately, the punks won that battle, or reached a pact in an ongoing war. They didn't win with their music as so little of it was heard beyond the punk scene, but with their attitude, which changed the thinking of so many and which was taken up by the bands who danced down the trail the punks had blazed"

The Georgia Straight also heaped praise on Tabata by writing "Bloodied but Unbowed takes a loving—and long overdue—look at one of the most fertile scenes in North American music history, with Tabata mixing rare archival footage with modern-day interviews with those who were on the frontlines".

What also excites me is that this film seems to be taking on a life of its own. So many people like me never got a chance to see it as the screenings were sold out (I was performing in New York on the date anyways). The grassroots swell of interest only can be attracted by something that is truth. Punk rock, to me, has always been about the search for the truth and a fight against complacency, mixed with cynical humor of the mainstream life of being a herded sheep; an organic pain collector hurtling towards certain oblivion. Punk rock just embraces this fact first, then asks "so what are you gonna do now?"

I know what I am going to do. Go and see Bloodied by Unbowed the first chance I get.

I suspect Bloodied but Unbowed is destined for a long life as a cult classic. I cannot wait to get a chance to see it in a theater or even on DVD. Until then, I can only hope that cutting edge film producers keep using Adobe software so I can get in on the V.I.P. lists.

UPDATE AND DISCLOSURE: Technoracle's founders have entered into a financial relationship with the company that will distribute this movie in order to support it's migration to digital streaming and DVD. In the interest of transparency, this is hereby disclosed to readers.

Posted by Duane Nickull at 7:58 am No comments:

This is a simple video tutorial on how to programmatically invoke LiveCycle ES services via an EJB API. To complete this tutorial yourself, you will need to do the following:

1. Download and install the LiveCycle ES2 turnkey JBoss solution from http://www.adobe.com/devnet/livecycle/trial/. Note that this is 3GB and if you would rather, please contact me dnickull at adobe dot com with your name and mailing address and I will send you out a DVD of everything you need.

2. You also need to download the Eclipse IDE. This can be downloaded from http://www.eclipse.org/downloads/download.php?file=/technology/epp/downloads/release/galileo/SR2/eclipse-jee-galileo-SR2-macosx-cocoa.tar.gz

3. The code project can be downloaded from here - http://www.web2open.org/adc/LiveCycleESProjects.zip

That is about all. Here is the video:

Posted by Duane Nickull at 3:26 pm No comments:

This is a short video demonstrating how to add a video object to a LiveCycle ES2 PDF form.

This is a video to accompany the written tutorial to show how to use the brand new features of LiveCycle Data Services 3.* and Flash Builder 4. The development methodology of using the data model to build an application is a very cool feature. Data is often bound to an enterprise process and being able to build an RIA demands that you have a well thought out data model. This allows the developer to reuse existing data rather than asking the user to enter information more than once.