The coolest thing at Java One 2006 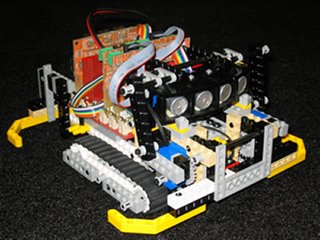 Okay - so Java One is in its' final day. Yes - tons of really cool technology here but three things really caught my eye and stood out from the others. I guess the gist is that software itself is no longer enough to be really cool because all three picks are both hardware and software based.

Number three was the computer controlled train set using Java to control all aspects of two HO scale engines interactions with the track. Yes- its' been done before but I have to tip my hat to those who can take the imagination to do this and somehow find the time too. I gave him a Flex 2 beta 3 CD and explained how it would be possible to make a flash webpage to allow people to log in remotely and control the train set. You could play with it from your desktop. Flex and trains - stoke!!

Number two was the java powered robot car. Sun's pavilion featured a home built, mad scientist designed computer controlled car that really blew me away. Just imagining the interfaces to connect all the controls of a car to a program, being able to read live input data and account for all variances to be able to drive a car is staggering to think about.


By far my favorite is the java controlled lego robots. Bruce Boyes of Systronix one upped everyone else by developing java controllers for robots. The system works well with Lego (tm), one of my all time favorite toys.
There is just something cool about putting java into toys.

so why is this my tops pick? The Java/lego robots were built using JVEX. JVEX-robotics is a project to interface the VEX Robotics System controller to Java single board computers. The goal is to free the Java host from low level device management responsibilities by delegating these tasks to the VEX hardware. The result is that Java can easily be used with the VEX kit, which is a great prototyping environment. You can come up with an idea during morning coffee and make a prototype using Lego and talk to it via JVEX all before lunch.

I'm going to order some of this - just think of the cool uses.

1. I could install these controllers inside the street lights in Vancouver and build a remote control and transmitter in my car so the lights are always turning green for me when I drive. Very cool. Still - others may get pissed if they found out.

2. I could sneak into the railways yard and implant the system into life sized trains then sit in Dick Hardt's balcony overlooking the waterfront and plays trains - with real trains! Rad!

3. I could build tiny legs for my cell phone and install the system with controls for the legs. The next time I lose my cell phone, I'll just jump on a terminal, log in and tell it to walk home by itself (serves it right for losing itself in the first place).

4. I'm going to place tiny switches in the elevators at all the tall buildings then randomly pick floors for people to go to. This would be too funny. I will then build a web enabled application to allow others to remotely control the elevators speed, destination and behavior with cameras to observe the resulting mayhem on CCTV over the internet. Better yet, you could bid on eBay to control your co-workers experiences in elevators. Too much fun!!!

I don't think I can play with just plain old lego anymore. What blows me away is that this stuff was so cutting edge 15 years ago that it would have been locked into a military basement somewhere. Now - you can buy kits from Lego and Systronix. You can use Flex to code front ends in Flash to allow distributed control over these robots and the whole thing is here today.

If you see a Sony Ericson cell phone with tiny robotic legs stumbling around looking lost, you know who's it is. Please kindly remind it that it shouldn't have got lost in the first place and point it towards Vancouver.

Time to go speak at Java One.

D
Posted by Duane Nickull at 8:54 am No comments:

Java One is really busy this year. Really cool too. Yeah - there is the usual plock about "enterprise java services" and "robust scalable architectures" as the new "paradigm". Buzzword bingo anyone?

Anyways, if you read this and are at Java One, drop by the booth and say hi. I'll be there all day every day.
Posted by Duane Nickull at 1:47 pm 2 comments: