There are many patterns for communication modelling how real world collaboration works is sometimes difficult.  One of the hardest things for a human being to do is to think about how they think. When we talk to people and start a conversation, they naturally do a few subtle things that are missing from email. This is how a conversation in person usually goes:

Person1: Hello. (introduction if necessary)
Person2: Hello
P1: I wanted to talk to you today to get your input into our current marketing campaign. I am responsible for making the final approval.
P2: sure
P1: Specifically, by Friday I have to launch the new campaign and we still don’t have a final logo chosen.
P2: So how can I help
P1: If you have time, I’d like it if you could review the choices and provide input on your favourites and why
P2: No problem. When do you need it by?
P1: Is tomorrow ok? It should take 5-10 minutes

Note that P1 has relayed the exact same model as RACI here.  Person 1 have stated a project, a deadline and more importantly has informed Person 2 of exactly what they are expected to do with the information.  There is a lot of subtlety going on here.  So why is email ineffective for the same purpose?  Simple, both speaker and listener do not share a context of the collaboration.  A lot of very subtle communication is done via body language.   In real time communication, a person can detect if the other does not seem to have the information by noting inquisitive looks or blank stares and fill in the blank.

The email version of the above is:

Check these design out and let me know what you think. We have to launch friday.

This gets lost in the inbox of course. The natural flow of language will be important to observe as we launch. One hypothesis is that email is relatively inefficient at conveying knowledge since it is often an asynchronous exchange and messages that arrive can be easily taken out of context. This, of course, is well known.

So how does RACI help?  Even if using RACI does nothing more than simply structure the roles for people, it provides that context around the communication and collaboration thread.  Individuals are empowered with the information of why they are being included in the collaboration.

RACI matrix software can also help structure this communication in a manner that is unambiguous and has the capability to facilitate decisions being made in a timely manner.  RACI is a good model.
Posted by Duane Nickull at 6:00 am No comments:

In this first blog post about Hacking the Enterprise, we will to introduce the concept behind the Whispr platform we are working on.  The concept of hacking the enterprise is about unlocking the knowledge within your human capital and building highly efficient communications models to allow you to make decisions and get business done.    The value of roles, clearly defined lines of communication and process is becoming universally recognized as the single most important factor in building effective teams.   It seems almost illogical that such a quintessential component of an enterprises’ success has been long neglected yet nothing much has changed with respect to the way people work together in the last four decades.   To understand more about Hacking the Enterprise and optimizing the effectiveness, we have to look back to 2001.

Research started to look at the failures of effective team communications after the tragic events of September 11, 2001 when an internal audit of communications and knowledge sharing was spearheaded by psychologists who sought to understand where the intelligence community could have done better.   The Harvard based team was led by the late Richard Hackman and they approached the work with a question of what made certain intelligence units functionally effective while others were not.

Richard’s team interviewed, observed, surveyed and watched hundreds of individuals operating across sixty four different intelligence organizations.  By watching them up close, he learned how most are viewed as solo or individual contributors yet have to function within the greater collective by collaborating with their colleagues.    Throughout all this research, the team identified a comprehensive list of factors and models that seemed to be factor’s in the cohesiveness and effectiveness of groups.  Within the context of the intelligence community, these groups can sometimes be ad hoc and survive only to address a very specific decision.  Cultural, regulatory and other factors cannot always be accounted for within this context however there were some startling revelations that had a much broader applicability of use. 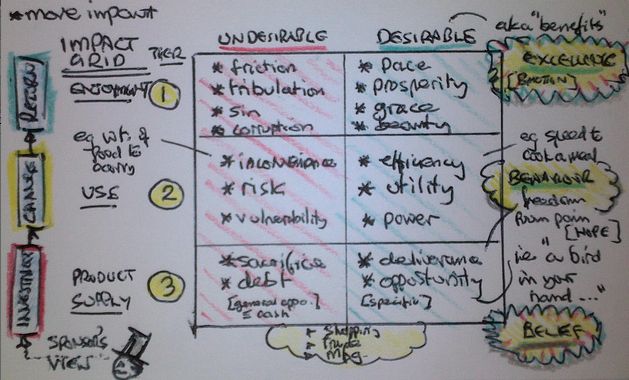 While the work is summarized in a book aptly named Collaborative Intelligence (http://www.amazon.com/Collaborative-Intelligence-Using-Problems-Business/dp/1605099902 ) Richard’s team noted that the critical factor wasn’t as simple as just having a set of static team members, a clearly defined vision statement nor was it singularly due to human endearments or egos.   It turned out that the single strongest predictor of group effectiveness was the amount of help that analysts gave to each other.

As with most enterprises, the highest-performing teams place a great emphasis on collaborating, coaching, teaching, and consulting with colleagues.   Those who shared little resources and did not effectively communicate with their colleagues for enhanced problem solving embodied the anti-pattern of this success.  Hacking the enterprise is a conceptual hack embracing the collective pattern of good collaboration to facilitate these good patterns.  Much like a set of synaptic relays making connections to each other for the first time in a small child’s brain, hacking the enterprise is about bridging gaps in knowledge and communication.

Individuals and enterprises benefit the most when they freely contribute their knowledge and skills to others and do so with clearly defined roles.   Whispr is build on that premise and facilitates the hacking the enterprise mentality by allowing ad hoc teams to create powerful, focused task forces to solve specific problems and preserving that knowledge.

So what is the call to action? Whispr is a platform that allows distributed teams to set up decisions (“Whisprs”) and add contributors based on the roles defined in a RACI Matrix.   Whispr is open for a very limited time for alpha testing at http://whis.pr.   If you have a decision to make and have a distributed team, this is the perfect tool for hacking your enterprise.   You can signup at http://whis.pr/signup. Those who come in now can use it for free for a limited time.
Posted by Duane Nickull at 6:00 am No comments:

Great Video on RACI and ITIL

ITIL is a Registered Trade Mark of the Cabinet Office in the United Kingdom and other countries. ITIL is an acronym that stands for Information Technology Infrastructure Library. ITIL itself is a familiar territory for any RACI practitioners.

The RACI matrix is similar to the ITIL Process Map in the manner it provides a summary of roles and levels of responsibility in IT Systems management processes. The video below is a very good creation that documents the consistencies and similarities between the approaches.

For more information about the ITIL Responsibilities Matrix, check out the link below: http://en.it-processmaps.com/products/itil-raci-matrix.html

Posted by Duane Nickull at 3:59 pm No comments:

Making decisions is something that RACI and DACI help with, yet provide very little in terms of electronically searchable knowledge.  Many RACI practitioners believe the true value of using RACI is in making the decision.  An equal or perhaps greater value might be inherent in the searchable database of knowledge resulting from using a RACI platform for decision management like Whispr.  Past decisions can yield a wealth of valuable knowledge.

Let’s look at an example to help understand the value.  Imagine a small development shop that regularly helps out a company with their IT needs.  During the course of operations, the company listens to the suggestions of the development shop and as a result, embraces a specific technology platform or programming language for a product or service offering.  This has happened in real life many times over.

Over time, development of the IT goes well but eventually the small development shop does out of business.  The larger company now has a lot of IT investment but very little knowledge about why things were done a certain way.  Since the smaller development shop no longer exists, there is no one left to answer important questions.

A new IT development shop comes in to help the larger company.  During the course of their familiarization process, they become aware that there are several choices that have been made and ask why.  Without any knowledge preservation, they have no way to perform a comprehensive analysis of the past decisions and have no idea of the reasons for various decisions.

Decision Analysis is facilitated by keeping an archive of your decisions, the context in which they were made and the knowledge of who helped drive the decisions and for what reasons.

This is just one minor example of how analysis of past decisions can be a valuable part of your enterprises future.
Posted by Duane Nickull at 4:03 pm No comments: