In round three of the winners bracket, Vancouver, Canada based video game team Best Yet upset Indecent Exposure, one the top ranked teams on the MLG pro circuit. In a close match, Conker, BlakOut, Toxic and Nutraways shut the door on their pro competition, advancing themselves to the next round later tonight.

Below - Toxic Euphoria and Nutra take time to chat with a fan between rounds. 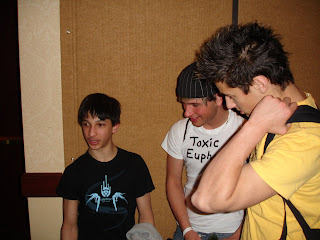 Posted by Duane Nickull at 1:39 pm No comments:

For most of society, video gaming conjures up images of lonely 30-ish geeks or pimply teenagers staring at violent screens in dark rooms instead of participating in real life. For a the growing ranks of amateur and elite competitive players, taking it to the next level means playing in front of millions of fans in live auditoriums with stage lighting resembling a rock concert. Prize money for a single season now tops well over 7 digits. Parents, take note – this is just as legitimate a career as any other.

This weekend, I am attending my first event of the Major League Gaming 2007 campaign kicks off in Concorde, NC as a gopher for team Best Yet (BY). Our team has traveled from Vancouver, Canada and Utah to compete against the world’s finest in the Halo 2 bracket, a game from Microsoft played by millions of players every day. I decided to travel to the event myself to experience what it has to offer. I had preconceived notions that the video game crowd are shy, anti-social types. This is the farthest from the truth I could have suspected. The event itself was like a constant raging nightclub (minus the alcohol, fights, drugs etc.) where friends met, played, conversed and just had a great time. This report is about exposing this world of gaming as it starts to explode from a fringe activity to a mainstream test of intelligence, agility, coordination and strategy.

Before continuing, I have a personal confession to make. I used to be in a chess club. I used to follow Karpov and Kasparov as they met new challengers including IBM’s Big Blue, a super computer that was claimed impossible to beat by humans given it could calculate far beyond the capabilities of the mere human brain. If anyone knows geeks, it is me. The chess matches used to draw out for hours and the boredom could be best described as a mass communal sedative.

Coming from Argyle High School in North Vancouver, BC, Christopher Nickull (a.k.a. “Conker”) and I set out with two of his team mates at 06:00 Thursday to catch a flight to the event. Players often use pseudonyms representing their alternate personalities. Conker, is well known amongst many in the Halo 2 competitive landscape. Adam, aka "Nutraways", is also a student an North Vancouver’s Argyle School however the twosome met their third and fourth team mates online. Halo 2 is played via the internet so players from multiple countries can compete and even talk to each other during their games. Niko, aka “Blakout” hails from Whiterock, British Columbia while their fourth team member from Utah is somewhat of an international halo 2 rock star. His handle, “Toxic Euphoria” or often just “toxic”, scares competitors and intrigues spectators alike. He has the elitist distinction of finding an “exploit”, a loophole in the Halo 2 code base that allows a player to manipulate the game to their advantage. He also has a very unique style of playing. Together, the foursome is known as the team Best Yet or BY for short. In Halo 2, when a player is shot, the screen says “you have been shot by
Posted by Duane Nickull at 1:12 pm 16 comments: