As some of you know, I am trading in my 2002 Porsche Twin Turbo. No - this is nothing to do with the price of gas, I just really don't drive it enough. The car has been a feature on Duane's World but is now up for sale. In the meantime, I am in need of another car. One of the things that I've noticed lately whenever I've been reading car reviews is that the new cars everyone is interested in are cool but they're not hot. What I mean by that is that these cars have some really interesting features but they aren't the kind of cars that you want to go cruising in with your buddies. Emerging car designers should think about ways to incorporate the cool features of these cars with a style that hot people are going to want to be seen driving. I guess people are maturing and realizing that things like hybrids are actually far cooler than a Porsche Turbo. Go figure?

For example, the Toyota Prius is great in terms of the technology used in hybrid cars and the fact that it gets great gas mileage but you aren't exactly going to want to drive up to your friend's house specifically to show off this car. Likewise, the Smart car is a cool car with a unique design that's different from a lot of the new cars out there but it's not as though you're going to be able to really feel like you're a hot guy while driving around in one of these cars. You don't drive up to someone else in one of these cars and rev your car engine to get attention on the road.

There's nothing wrong with the new cars that are coming out today. All of the car reviews about vehicles like the Toyota Prius and the Smart car seem to indicate that there are some features about these cars that are worth keeping as we design new cars in the future. I just think that we need to take some of the benefits of hybrid cars and small cars and make them a little bit more stylish. I'm all for driving a cool car with modern features but I don't want to look like a tool while doing it.

Why doesn't FIA or some other organization have a racing class for these cars? A lot of car technology (Radial Tires, Seatbelts, crumple zones, improved fuel mileage to name a few) are the direct result of innovation stemmed by racing. I can see two cars guys 10 years from now having this conversation:

A personal interview with Andre Michelle, Webinale 2008 and Spoiler

Duane's World episode 6 is now out. I was really grateful to have been able to spend time interviewing Flash guru Andre Michelle. He discusses his new venture (www.hobnox.com) and shows off some cool screenshots of the new audio tools. These are really amazing!! Andre's work takes Flash to the ultimate edge.

The music for the Code and Tunes sessions is provided by Spoiler, my newest favorite metal band from Germany. Bass player Marc Thiele hand picked the songs for the video. If you get a chance to see Spoiler live - check them out! The code and tunes shows some Flex code to work with audio and explains how to add a pause, play and stop button to an audio player in a few minutes. Thanks to all the guys from Webinale 2008 (Felix, Stefan et al) for appearing in the video and helping me with interviews and location logistics as well as putting on a great conference! Here is the show. Feel free to use the embed code to redistribute wherever!

Do you feel a wicked urge to build a meta schema language, fix the semantic web or start data modeling (only advanced cases of XML fever)? This doc explains why. LOL - thanks Bob!
Posted by Duane Nickull at 2:13 pm No comments: 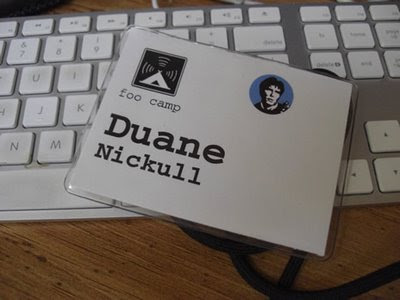 I just got back from O'Reilly's Foo Camp 2008. It was really a life changing experience. The ability to mesh/mind meld with the world's greatest minds was incredible. Topics ranged from serious discussions on UN policy to create global fair trade and equality to guitar hacks and inventing new games.

I'd go as far to say that the 300 colleagues and peers at this year's Foo Camp should be consulted to set world policy. My head is full and it will take weeks to digest. I feel grateful for the interactions and the invitation to attend this weekend. There will be a future episode of Duane's World TV highlighting the event with interviews from Bob Glushko (UC Berkeley), Tim O'Reilly (founder - O'Reilly Media), John Markoff (New York Times) and Dries Buytaert (Drupal Founder).

I also want to express sincere gratitude for all the staff at O'Reilly for putting on this event. Everyone pitched in to make this a perfect weekend. Too many people to thank, but thanks to Tim, Sarah, the cooks, facilities staff and all others that made this possible.

Duane
(Feeling really grateful and optimistic about the future of our planet)
Posted by Duane Nickull at 7:34 pm No comments: