Last night in Vancouver I spoke at the Drupal User Group about Flex and PHP. Kevin Hoyt is owed a major thanks for helping me get set up in time and wrote a ton of materials for the class. The gist was to talk about how to use a Flex front end for a PHP middle tier. 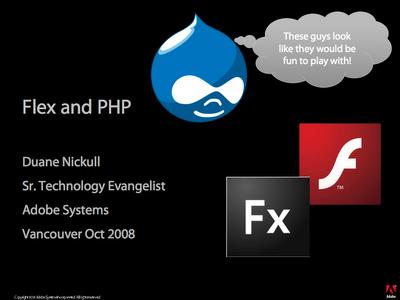 PHP (especially Drupal) is great for plumbing MySQL into the front end of web applications and web pages. There are some issues when trying to skin Drupal applications however. These mainly pertain to the inconsistent support for CSS from the various browser cowboys. Flex can help alleviate some of that workload and makes a great companion for PHP.

The materials from the presentation can be downloaded from this website:

I have known Jon Bosak for years. For most, he needs no introduction and has been credited with many things from being a co-inventor of XML to really moving technical standards into the limelight they deserve. Most people are completely in the dark about just how much the standards game truly affects them, paying out hefty software license fees without realizing some of that goes to pay for patents and other IPR activity.

Jon has now composed what could be his magnum opus on the topics of the recent debate over OOXML and ODF. I encourage everyone to read it. It is available here:

Jon - thank you from everyone!
Posted by Duane Nickull at 1:06 pm No comments: 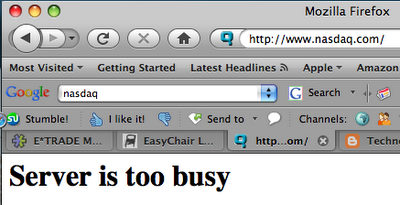 I got up early at 6:00 today thinking I would beat other investors to the punch on the TSX exchange to buy Canadian Imperial Bank of Commerce stock at $48. After all, the dividend yields roughly 7.5% at that price! Way to slow! By the time the order reached the desk it was over $56 per share and peaked at 58 so far. My suspicion was correct - every smart investor is up making orders and we Canadians really suck at planning holidays (yesterday was thanksgiving for us). I tried to get onto the NASDAQ server to find some bargains and got the shot above.

This is when it seems like a good time to remind myself of the herd mentality and not fall into the trap. Golden rules for the stock market:

Have to run now and get in line to put in another HTTPRequest() object to the NASDAQ server.
Posted by Duane Nickull at 6:55 am 1 comment:

Why I hate Wikipedia

I have ranted about Wikipedia going from a worthwhile, exciting example of how to harness collective intelligence to a micro-managed fiefdom who's ruling class does not tolerate any dissent. The main issue is their "notable" clause, instructing editors to delete stuff that is not notable. Rather than repeat the danger this poses to the internet, I will repeat one of the comments left on my previous post on the subject:

So - it looks very serious.
there are people who are deleting things and there is no due process.

This is not the best way to run a rational institution.

It might seem silly to demand a chance for informational accuracy in this particular world, but perhaps it might be time to attempt to take this to a higher administrative power within the Wikipedia hierarchy?

The entire concept of notability is antithetical to the functioning of the internet.

who cares about Phlostigen, i mean really who really knows what a gluon is, and i have never even herd of an ibex, they must be radically unimportant.

My personal complaint is the deletion of underground music outfit from Australia named "go genre everything".

The entry was online for years and years, passing test of citeability and wikification, being written by people who were only just familiar with computer literacy.


Suddenly it is Deleted in a moment of A7 swift deletion fervour.

The question of Notability is the one i really wish to raise.

I have seen people noted on wikipedia as trivial.

I have never met a trivial human being in my entire life.

Individuals may have an enormous effect on the environment, but I suspect that if it is looked into , it is not so much the effect of individuals which create massive change, but the so called trivial people who do all the grunt work to make it happen.

By what criteria are we needing to define one person as more important than another. if the article is too long say make it shorter. if the article is badly written, get it written better, but why, does not everybody in the entire world have a wikipedia page detailing their biography?

It must be a hardware issue.

That would explain why so many of the "trivial" people as has been mentioned above have been deleted, in favour of important things such as the A7 motorway.

I have to totally agree. A band I play Bass for (Stress Factor 9) was deleted, so was Randy Rampage's homepage (founder of DOA and lead singer of Stress Factor 9). Randy was the goddamn founding member of DOA, a band cited as a major influence by the Red Hot Chili Peppers. Some pointy haired nitwit editor has unilaterally deleted this, assuming no one is interested.

The main point of why this type of action is dangerous, is that you delete truth and promote lies (my entries on ebXML were deleted and I was banned for vandalism for stating the truth while the ebXML entry in Wikipedia was full of errors). When you try to control the uncontrollable, the result always sucks.

Wikipedia needs to wake up and realize it is hovering on the brink of relevancy before it is laughed away as the sham it is becoming.
Posted by Duane Nickull at 3:05 pm 4 comments: