This episode covers the Web 2.0 events in San Francisco and Berlin. I have some additional footage of Life Before, Life After, which will be used for a future episode. The Code and Tunes segment shows a demonstration of how to connect Flex to ColdFusion using the Wizard and AMF RemoteObject.

A personal plea: Lance Armstrong (7 time Tour de France winner) has the Lance Armstrong Foundation as a legacy to raise money to fight cancer. If you enjoy this episode, please visit LiveStrong and make a contribution to help fight cancer. Lance donated his time and energy to come and talk at the Web 2.0 event in San Francisco and I want to encourage everyone to give back to this important cause.

Posted by Duane Nickull at 12:45 pm No comments:

Traditionally, accessing text from Adobe Flash (R) files has been difficult. When a SWF has different states, only one state may be initialized (in memory) at any time during the execution of the SWF. The ability to detect other states and change state, then grab text from different states is demonstrated in this video. This demo is run on Ubuntu Linux.

Anyone interested in Flash SEO should take a close look at the output of the terminal. This shows exactly what was encountered for the given application. The API is not public nor is it known how Google will utilize SWF text content or weigh it against HTML text. Both of these are obviously secret for a good reason.

I am still running tests on earlier flash SEO posts and will likely have some Flash SEO tips within 6 weeks. It took longer than expected for Google to index the newly created data (had to keep checking the log files) and the bot has not reached very far into the SWF so far.
Posted by Duane Nickull at 10:19 am 22 comments:

In case you missed the big news on January 12, Adobe is now offering Adobe LiveCycle ES Developer Express. This is Adobe's first (but not last) major foray into the world of enterprise cloud computing. The LC ES Developer Express software is a full version of Adobe LiveCycle ES that is hosted in the Amazon Web Services cloud computing environment and provides a virtual, self-contained development environment where enterprise developers can prototype, develop, and test LiveCycle applications (*.lca files).

LiveCycle Production Print, LiveCycle BAM, and LiveCycle PDFG 3D are not included in this installation. In the Developer Express installation, LiveCycle is running on the JBoss application server and the MySQL database. The first screenshot below shows one of my three instances up and running:

Once you get an instance up and running, it appears to be virtually running on localhost:8080. There is a small download called LiveCycle Developer Express (shown below), which then allows you to log in to the instance running in the cloud. 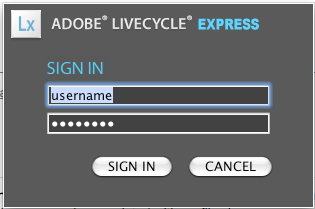 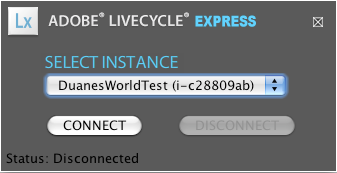 and hit "Connect". Once you connect, you will be able to log in by accessing the admin panel via a browser. The URL is http://localhost:8080/adminui/secured/admin.faces. Note below that I am now logged in as Admin while running it in the cloud from my Mac. What does this mean? LC ES on the Mac!!!

From here you can browse all running services on the instance: 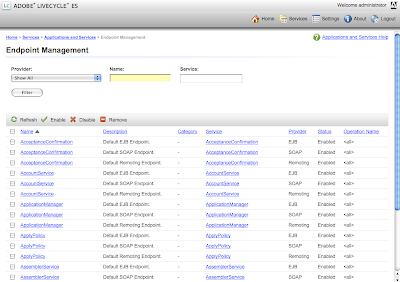 The service, available to all members of the Adobe Enterprise Developer Program, allows developers to bullet-proof their applications without having to invest in a development environment or test lab. I will be unveiling more on a future episode of Duane's World when we get into SOA and ESB cloud architecture.
Posted by Duane Nickull at 1:56 pm 1 comment:

LiveCycle ES Out of Memory Error

Due to repeated posts on this topic on the Google LiveCycle Developers list, I am posting this technical bulletin in its entirety on my blog to help inform people.

Out of Memory errors with LiveCycle ES JBoss turnkey installation

Out Of Memory (OOM) errors occur on an Adobe LiveCycle ES Update 1 JBoss turnkey installation. This issue is related to the MySQL JDBC driver version and the data source connection settings.

Caution: This update is strongly recommended.

Connection checking for the IDP_DS data source has been introduced in LiveCycle ES Update 1. Due to how connection checking is done by MySQL JDBC drivers prior to version 3.22.1 and how JBoss handles the validation result set, heap memory is being used with the JDBC driver, causing multiple open result sets. Because the JDBC driver installed as part of the turnkey installation is version 3.1.12, you must perform the tasks described in this article.

You must obtain and install version 5.1.6 of the JDBC driver to reduce the number of open result sets and resolve the out of memory issues. You must also change the data source and JVM settings.

Obtaining and installing the JDBC driver

This section describes the tasks required to obtain and install the appropriate MySQL JDBC driver.

To obtain and install the driver:

To modify the data source settings:

The JBoss turnkey install sets a number of JVM arguments in the run.bat file and in the JBoss for Adobe LiveCycle ES service definition. After you have updated the JDBC driver, you can modify the run.bat file.

To modify the run.bat file:

To modify the JBoss for Adobe LiveCycle ES service definition you must uninstall and reinstall the service with new JVM arguments specified.

The JBoss server is configured using a batch file, InstallJBossService.bat that is created during system installation. During the turn-key setup of LiveCycle, LiveCycle PDF Generator ES support for native document conversion is an optional feature. The batch file will vary slightly, depending on whether you have enabled this feature.

To uninstall and reinstall the JBoss for Adobe LiveCycle ES service:

MixMatchMusic just announced it has acquired Mix2r, a web app that enables electronica artists to upload their music for remixing and for creating derivative works by other electronica artists, fans and music enthusiasts. Mix2r's community of musicians, DJs and fans features more than 6200 songs and music stems. MixMatchMusic also has a ton of online tools for remixing and widgets for remix contests.

"MixMatchMusic's combination with Mix2r adds a lot of dynamic new music to our library and brings us closer to the critical mass of stems and community needed to fuel our next stage of growth," said Charles Feinn, MixMatchMusic co-founder and CEO.

Both the Mix2r and MixMatchMusic sites use or will use Adobe® Flash® Platform technologies including Adobe Flash, Flex and Adobe® AIR™. These technologies will be used to create future versions of the combined site.

Emerging and indie artists win as a result of this combination. The breadth and depth of content and the number of people contributing to it adds energy and creativity to the community, and that in turn will attract more people and more great music.

This is big news for both Mix2r and MixMatchMusic and I look forward to seeing what the combined companies will provide. Congrats to both!

Posted by Duane Nickull at 10:10 am No comments: