More SEO tips to save you tons of work

I have noticed that some of my previous tips on SEO have generated huge amounts of comments. This one for example has generated over 100 comments although I have deleted most since they were blatant advertising.

I want to share a little secret to those who are still adding comments with links in hopes of building up link equity.

Surprised? Don't believe me. Check it out for yourself. The first comment on the page above is from a company called Wavestech. They claim to be an SEO company but obviously do not understand the statement above. You can check out who links to you in Google buy going to http://www.google.com and doing a search in this format (note no space between 'link:' and domain name):

Of course, replace "domainname.com" with the actual domain name. To verify whether or not wavestech has anyone linking to it, check out their results:

Dang!! One result. I wonder how much time they spent replying to comments in the last year and wondering why they are not elevated. Another company called 123seoservices.com tried it too but they have no results and no link equity.

The rule of thumb here is simple. There are no easy and quick ways to get to #1 for any search term. You have to pay your dues. Let the natural path take you up there. If you make a good site, with good information, it will find its way to the top of the pile eventually. Take "SOA" as an example. Try a search for "SOA White Paper" on Google.

The number one result for this is a white paper I co-wrote for Adobe.

We did not get #1 by spending hours making comments on others blogs. We spent the time writing a well researched paper that tries very hard to explain message exchange patterns in SOA without pitching products. This time was much better spent making a good paper and letting people search for it, find it and get it to #1 in Google by its reputation.

People linked to it because they liked it and thought it served a purpose. There are 137 links to that paper:

Google engineers also monitor networks for patterns. It is easy for them to spot a pattern to catch cheaters. Even if you crack the hashcode algorithm (I think I am very close now) for the cryptic string you get back in search results to track what you click on, your spike in traffic would be caught if you used it. Better to spend the energy creating good work that people want to use.

Spend time making quality sites; do not try to cheat your way up to the top. Cream rises naturally to the top. Put the energy into creating good content.
Posted by Duane Nickull at 4:58 pm 18 comments:

During the recent Web 2.0 conference in San Francisco, I was lucky enough to get to attend and work the booth for Adobe in the Expo area. A lot of people hate booth duty but I personally love it. It's really where we get the best, most honest responses from members of the public, and it gives us a chance to poll how our corporate image is fairing.

FLARToolkit will detect the marker from an input image and calculate the camera position in three-dimension space. Something like Helper library are planned, but further processing (like synthesizing the 3D Graphics) needs to implemented by yourself. You can try a demo of it here at General Electric.

While at the booth, we got awarded the "Best in Show" award from Web Professional Minute, sponsored by Peachpit Press. This image links to the video. 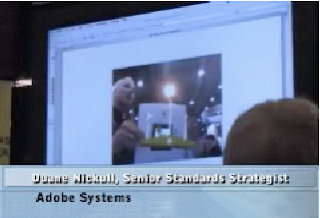 My colleague Lee Brimelow took the concept one step further and has now produced an excellent tutorial on how to use the FLARTookKit for AS3 (Flash/Flex/AIR) developers. 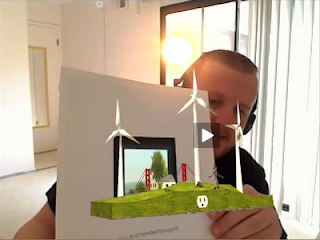 If you haven't seen Lee Brimelow's GoToAndLearn website, it is a must see.
Posted by Duane Nickull at 8:33 am 2 comments: