I have eaten in over 30 countries in multiple thousands of cities over the last 2 decades as a traveler but never have I been at a restaurant worse than the Seaport Cafe in southern NY. Note that this includes restaurants in developing nations or transitioning economies. This is the first restaurant I have eaten at that was so bad I felt obliged to blog about it to warn others.

This place has the worst food you can imagine and a fixed gratuity even though my wife and I waited over 30 minutes to be given menus and another 30 minutes to get our food. But hey - why hurry when the tip is already built into the bill? When the food arrived it was cold and stale. The tomatoes were white (unripe), lettuce wasn't washed and the buns old and frightful. I wish I had check out the Google reviews first as it seems everyone else agrees this is the worst restaurant ever - http://maps.google.com/maps?oe=utf-8&rls=org.mozilla:en-US:official&client=firefox-a&um=1&ie=UTF-8&q=seaport+cafe+new+york&fb=1&gl=us&hq=seaport+cafe&hnear=new+york&cid=0,0,12350209958079735554&ei=HuPuS4yhLormswP6gd28Dw&sa=X&oi=local_result&ct=image&resnum=1&ved=0CBMQnwIwAA

The worst part is the complete lack of understanding of the process of waste. Everything came in plastic containers. Here is a photo: 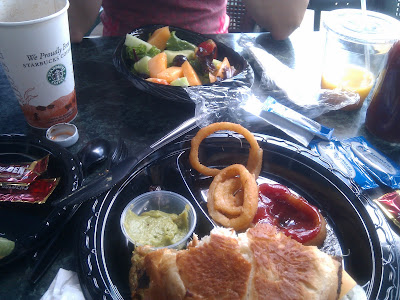 The servers are indicative of a society where they are only the second generation in their bloodline to walk upright, some of them probably still have relative who live in caves and trees.

The list goes on an on. Shame on you Seaport Cafe!!!

YOU HAVE BEEN WARNED! STAY AWAY!
Posted by Duane Nickull at 11:03 am 3 comments: