I want to thank everyone in all my communities and networks for the huge outpouring of support and well wishes.  I am once again humbled to realize I am a truly blessed individual and have great support and friends.  My mood every day is less and less complacent, a trait I cannot stand.  Working at a large company too long breeds complacency and bureaucratic tendencies.  These are rapidly fading as our new venture starts to shape up.  Invention is the mother of all genius and intuitive improvisation is the key to that genius (the latter part applies to the Richard Dean Anderson in all of us).

Many of you have asked me what I am doing next or offered me jobs.  I appreciate that and the thought of entering into another job is horrifying to me.  I worked eight years at a big company, learned a lot, and have to digest the good, the band and the truly ugly.   Adobe has been a very important role in my life and will continue to be a company I work with.  My colleagues on the Evangelism team are all great individuals and I'm sure we'll cross paths again, even if I am hopeless at video games.  I honestly wish all of them the most in terms of happiness and fulfilment.

So what is next?  As the blues brothers did, so has Yellow Dragon Software.  We are "Getting the band back together" to work on some game changing services and software.  The new company, aptly named Überity, is operating in stealth mode right now.  A lot of you have requested information and we honestly are in stealth mode right now.  We cannot divulge anything publicly however if you wish to be amongst the first to know what we are doing, you can sign up now at http://www.uberity.com and request to be placed on the list.

Why are we doing this?  Simple.  Doing what you like to do to earn a living is coolest thing an individual can have.  Me, a former professional mountain biker, professional musician and tech guy understands this better now that I did a decade ago.  We LOVE innovation and solving complex problems.  We love delivering value to society.  We love doing what we love doing.  Our work has to be fun.  How cool would that be?  This is why Überity exists.

According to the urban dictionary:

Uberian
To us, doing what we love for a living is about as cool as it gets.
Posted by Duane Nickull at 6:43 am 3 comments:

One of the key areas of growth I have been watching is the birth of the open data movements.  The Open Data Foundation is an important group who's mandate includes helping many agencies migrate to an open data architecture.  (Disclosure: I sit on the Advisory Board). As a standards guy for more than a decade, I find their mandate admirable:

"The Open Data Foundation is committed to using and contributing to international standards and is a project- and results-focussed organisation. We believe in using open standards to deliver measurable benefits in solving business problems in the collection, production, and dissemination of statistics. The aim is use and integrate these standards in a coherent and consistent way, to develop tools and techniques to make them easy to use, and thereby work towards a universal and harmonised statistical architecture."

As noble as it sounds, the devil is often in the details.  I have a meeting later today with David Eaves, an Open Data guru who has worked with many governments including the Government of British Columbia, Vancouver City Council (as championed by Andrea Reimer) and even at the national level.  The gist of the work is that if we, as taxpayers, are footing the bill to create this data, shouldn't we be able to use it to make informed decisions?  The answer to me is an overwhelming yes.  So what about the details then?

If you take a look at the data publishing done my most agencies, it is often in mixed standards (flattened PDF's, Spreadsheets, Custom CSV (both text and binary), XML and more.  Some o these format are easy to work with but trying to parse a spreadsheet with a non-deterministic style to it is a daunting task.

I recently took on such work for a proof of concept for the government of British Columbia.  I worked with some CSV data from this stie and created a mobile application that runs on iOS, Android and BlackBerry Tablet. 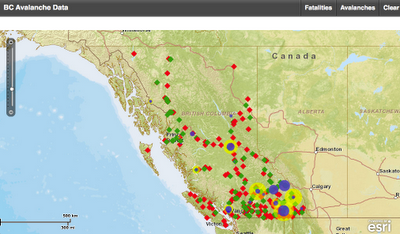 One of the things that jumps right out is that open data needs a specialized set of Message Exchange Patterns and the published data has to be deterministic, available in many formats (like JSON/XML) and that callback and notification support is required in the event the data changes.  As an example, this data is published as static data.  As soon as I use it by embedding it, it could be obsolete if the original copy changes.

Another issue is that spreadsheets are not deterministic.  If you have a spreadsheet and output CSV such as this:

it can be major headaches for those trying to parse the data.  XML is far better yet this XML has issues: 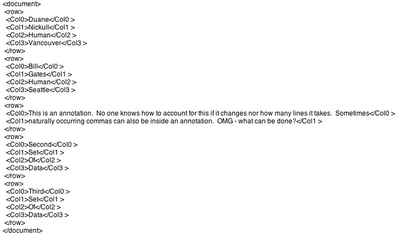 These are relatively small data sets too.  Imagine large data sets being requested by mobile devices?

What is required in this industry is a new type of data server that can address some of these problems.  Ideas are rolling in my head already.