I guess this is a great follow up to my last post pondering whether or not the theft of Coca Cola recipes was preventable. Adobe has now offered the Adobe LiveCycle Policy Server as a service. Aside from trendsetting by offering software as a service (SAAS), this provides an excellent opportunity for anyone to test drive the functionality without having to download, install and configure the Policy Server.

The service is easy to use and can be used with Acrobat 6 or 7 although 7 offers higher security by utilizing the AES encryption standard in 128 bit cyher strength.

The Protected PDF service is now available as a public beta (users need to create a free trial account). You can access it either via the Create Adobe PDF Online service https://createpdf.adobe.com or directly via https://policy.adobe.com/spdf/login.do

Policy Server protects PDF documents and will not allow them to be rendered unless the policies declared by the document owners have been satisfied. Even then, APS might not allow certain types of interactions with the documents such a printing or copying parts of the document.

What I like doing is also using it as a tool to see how many people actually read the stuff they ask you for. Any PDF document can be audited to see who actually read it, for how long and what other actions they took.

Wouldn't it be fun to ask someone to summarize a document you sent them when you know for a fact they haven't read it? Oops - now my prankster side is emerging.
Posted by Duane Nickull at 12:21 pm 1 comment:

Another preventable theft of IPR? Maybe.

In my position as a technical evangelist, I often get opinions flying at me left, right and centre (note "correct" spelling of "centre") of issues. One recent issue that blew me away was in response to a news bit about how the FBI allegedly stopped an espionage ring from stealing a secret Coca-Cola recipe and selling it to rival Pepsi.

Given I usually talk about how using Adobe LiveCycle Policy Server could have prevented such things, many people were eager to come up to me and express that I should write about this. I am hesitant to make any such claims for a number of reasons. First - if you are dealing with people who have access to information and they are really intent on betraying your organization and leaking the information outside, there is little you can do to stop them. Employing some advanced information assurance technology like Adobe Policy Server or Microsoft’s Rights Management Server will do little to thwart someone with a pen, paper and access to the recipe or a digital camera. Secondly, if you can render something once, you can capture it and re-serialize it to distribute electronically later. The side channel art of deception is also commonly referred to as "Social Engineering".

People looking at Policy Server need to be very clear on their expectations. Policy server can do a number of very important things to protect digital property. Looking at the scenario at Coca-Cola, I would have recommended the following:

In short, no matter what security system you put in effect, someone can and will find a way around. What Applications like Policy Server do is make it more difficult for people to do front channel attacks, often drawing more attention to themselves as they have to develop side channel tactics.

On a side note, no one has yet claimed the $500.00 I offered if this Adobe Policy Server protected document could be rendered. It is still up for grabs if anyone thinks they can defeat Policy Server. The cash is sitting here – waiting for you.

Posted by Duane Nickull at 2:40 pm No comments:

My new photo, taken by Matt Mackenzie, has caused a stir in the tech community, but in my own true fashion, I really don’t care. So What!! The concern seems to be that I have a striking similarity to Johnny Lydon a.k.a. Johnny Rotten of Sex Pistols and P.I.L. fame. Of course - as a punk musician, the Pistols were one of my all time favorite bands and a major influence. In fact, my new band, F.L.U., is heavily influenced by a sound created by the Pistols. I also find that P.I.L was imenseley more musically interesting than the Pistols. Therefore, I find any comparison to Johnny a major compliment and there are some similarities:

1. Neither of us is complacent. If something is broken - do something about it.
2. Both of us are musicians who write and perform politically driven music.
3. We both push the boundaries. No society advances without someone constantly provoking it. People hate it but it needs to be done.
4. I guess there may be a slight resemblance between my picture and some from his site but you judge. I personally thought I was more like Billy Idol from Gen-X. Met the guy once - we do look alike. 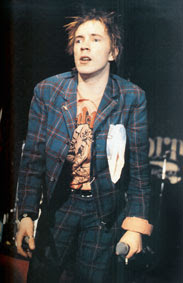 Do we look alike?
Posted by Duane Nickull at 3:59 pm 3 comments:

Adobe LiveCycle: why is it so boring?

So you might think that is a funny title for a blog entry made by a guy who is supposed to be the evangelist for Adobe LiveCycle. I mulled it over for quite a while before deciding that it really is accurate and portrays what I want to say.

For those of you who do not know what LiveCycle is, it is a core part of Adobe’s engagement platform. Essentially, it is a platform plus a series of servers that provide core functionality to act as a bridge to allow an enterprise to engage the far edges of the internet in a variety of ways. The marketing spiele states:

The Adobe® LiveCycle® family of J2EE-based enterprise software enables organizations to create, deploy, and optimize solutions to more efficiently capture, process, and archive information. It combines robust process management with electronic forms, document security, and document generation in an integrated and cohesive set of products that work inside and outside the firewall, for users in online and offline environments.

LiveCycle solutions leverage the universal client Adobe Reader® software and Intelligent Documents based on PDF and XML to capture information from users and automatically process it to the back-end or transaction systems that need it.”

For more about what it is, just visit http://www.adobe.com/products/livecycle/

The top four reasons why I think some find it boring?

Of course, if you are excited about LiveCycle, that doesn't imply a social adjustment is in order. The people who make, design and promote LiveCycle have to be somewhat fanatical about the platform itself and we are.

Microsoft and ODF: Yeah, what he said.

I cannot over emphasize the importance of accurate journalism in my blog. Rather than repeat this, please just read the ZDnet blog on the subject: