This Dilbert cartoon really got me thinking about the last time we presented the SOA RA work at a conference.

I was standing at Vancouver International Airport watching luggage being automatically mangled by their conveyor belt. A few of us filmed it while offering a commentary. Very funny only if YOUR luggage was not on this flight.

I came back from Ottawa today and found that my home business phone had been disconnected by Rogers.ca. I checked and actually re-paid the full balance of the last bill, thinking I had somehow missed it. Upon closer inspection, it turns out I have already paid the bill - TWICE!!! I challenge Rogers to prove otherwise as I have the records! As a result, I really feel everyone needs to know how really sad Rogers customer service is.

I got on the phone with "M", a representative. She is obviously in a call centre because she cannot grasp simple facts like people need their business lines to survive and lines that are errantly disconnected should be immediately re-connected. Her "manager" has to approve it and make the transfer but their internal system crashed.

Rogers is not quite as bad as Telus, but they are getting close. Shaw Cable on the other hand is a shining example of great customer service. At Shaw, a human actually answers the phone. When I phone the number printed on my Rogers bill, I get transferred to between 2-5 people before someone from the "right" department can attempt to understand. This reflects really badly on their ability to survive long term IMO as it both wastes their employees' valuable hours and annoys customers.

I am left in the lurch right now, having paid over $300 when I actually owe less than $200 and I'm still without a phone. Will update later.

Don't do business with Rogers for home phone if you do not have to. Same for Telus.
Posted by Duane Nickull at 1:40 pm 8 comments:

In this interview, we feature great indy music from Eddy Bugnut (with download links) and talk to Robert Horne, SAP/Business Objects evangelist, about their adoption of Flex and AIR for the front-end to SAP systems on a global scale.

The code and tunes segment works with an associative array (also multidimensional array) and binding it to a Flex chart. The source code will be made available to anyone interested by emailing me at dnickull at adobe dot com.

This video for the Adobe Developer Connection just launched showing step by step how to build a video project in under 4 minutes.

The source code can be downloaded here. There are about 30 projects in total with complete source code you can download.

A future episode of Duane's World TV will also feature this segment and interviews from the European Broadcasting Union meeting in Geneva, CH.
Posted by Duane Nickull at 4:48 pm 1 comment:

Version 1.1 of the Adobe Integrated Runtime (AIR) is now publicly available. Adobe has released a FAQ sheet to bring developers up to speed on what has changed. Here are the main topics:

1. AIR has been translated and can now be localized into ten additional languages (English only for 1.0). The new list of languages now includes Japanese, French, German, Traditional Chinese, Simplified Chinese, Korean, Spanish, Italian, English, Russian, and Brazilian Portuguese. I presume this probably also translates into where the most AIR activity is so if you want your language supported, get active. DISCLAIMER: I am just guessing.

2. Coinciding with the above language support, the AIR APIs and file formats have been updated to enable AIR-based applications to be localized and International keyboard input is now supported. I haven't had time to play around with this yet but will try to get some code samples together in the days to follow.

There is also added support for localizing the name and description attributes in the application descriptor file. This means that the app name etc. will be available in the localized language. Also introduced is support for localizing error messages, such as SQLError.detailID and SQLError.detailArguments, in the SQLite database and the addition of a Capabilities.languages property to obtain an array of preferred UI languages as set by the operating system. Note that the <mx:html> button labels and default menus, such as context menus and the Mac menu bar, have been localized to all supported languages as well. C'est une nouveux dialog en Francais ici! 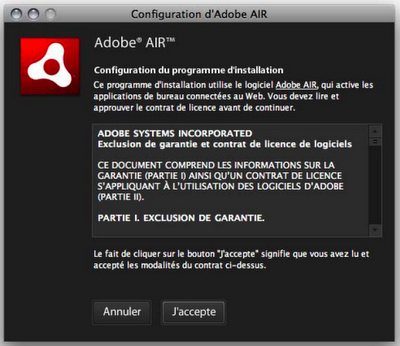 4. Security Upgrades. A new certificate migration feature is available that allows developers to migrate their applications between different digital signing certificates. Read the documentation on how this works.

Developers - If you use Flex Builder 3 to build Adobe AIR applications, you will need to manually update the SDK. Instructions on how to perform a manual update are described in the Flex Builder TechNote. You can find out more about Flex 3 and the Adobe AIR 1.1 release on the Adobe Developer Connection site.

While AIR 1.1 is a dot release, it represents a significant step forward in AIR capabilities, and its development required a significant effort from the core AIR team and from teams around the company. The Adobe AIR team deserves a huge round of applause.

Posted by Duane Nickull at 6:44 am No comments: