This year the Adobe MAX event will have the most comprehensive LiveCycle ES program of any event. In case you missed the previous announcements, MAX 2008 is going to take place November 16-19 in San Francisco. You can find out more at the MAX 2008 site here. It is the single focal point for LC ES training this year on our planet! Some of the top picks for LC ES training include these courses:

Hear about Adobe’s product and solutions roadmap and discuss Adobe’s vision so that together we can create the enterprise of the future.

Agile Testing of Enterprise RIAs with Flex and LiveCycle ES

See how Adobe's client and server technologies can be leveraged together to build engaging applications. See how Flex and AIR can be used as a front end to a complex back-end process deployed on LiveCycle ES.

Learn how to build and deploy rich Internet applications using form guides, part of Adobe LiveCycle Designer. Form guides are an alternative view of a form based on Adobe Flash technology that guides users through the form-filling process step by step. Form authors build on an existing form design to provide a more visually appealing and streamlined method of capturing form data. The enhanced interface can help reduce data entry errors by simplifying the amount of information presented to a form filler at a given time.

Learn how to build SOA clients with Flex and Adobe AIR. In this hands-on session, you will explore how to build various service clients using the WSDL Import Wizard, hand-coded ActionScript 3.0, and simple REST-based services. Flash Remoting and performance metrics will also be covered. This session is intended for those who build front-end service clients for business applications. Attendees should come prepared to write code or partner with someone else writing code. (This session complements "Deploying Services with BlazeDS and LiveCycle Data Services ES.")

Build an end-to-end application from scratch using Adobe LiveCycle ES. The application will utilize forms, orchestration, and many of the Adobe LiveCycle platform features. Learn how to easily integrate with external systems and how to include people in business processes for approvals, reviews, and more.

Inside the Adobe AIR Cook-off: The Best Show Off Their Winning Chops

See some of the best work being done in AIR application development today. Get insight from the authors of the Adobe AIR Cookbook, plus a group of the top contributors to the Adobe AIR Cookbook website. For the past six months, there's been an open call to the RIA developer community to show off their top tricks and best practices; in this session, you'll see their work in action and get a chance to exchange information with the panelists. There may be a bonus interactive feature or two in this session (hint: involving prizes and all comers).

InsideRIA Outlook, 2009: What Every Developer Needs to Be Thinking About

Join top experts to hear how standards, the economy, emerging players, workflow, client expectations, and more are affecting the industry. InsideRIA regulars representing some of the top houses in the business discuss the top strengths, weaknesses, opportunities, and threats in the industry. Panelists have five minutes to outline their top SWOT points; then the panel and audience have an open Q&A on what we can expect in the next 12 to 18 months.

Peel back the marketing-speak and take a real look at what LiveCycle ES is all about from the platform to the tooling. Topics will include how LiveCycle ES fits into the enterprise and which types of applications are well suited for LiveCycle. This session will also include a product demo.

Deep dive into the LiveCycle ES platform architecture. Topics will include the service container, invocation layer, service orchestration, and events and techniques for extending and customizing the platform.

Learn how to develop and deploy applications with Adobe LiveCycle ES (Enterprise Suite). By enabling service-oriented architecture (SOA) and business process management (BPM), LiveCycle ES allows both business and IT professionals to visually assemble end-to-end processes that unify systems, people, business rules, and web services quickly and flexibly. We'll develop a LiveCycle based application using LiveCycle solution components and determine how to implement business rules in a process. We'll also cover process deployment and the LiveCycle workspace and use the record and playback feature to debug an application.

Find out how Adobe Solution Accelerators enable the rapid development of recurring industry solutions with Flex, Adobe AIR, and LiveCycle ES. In this presentation, Adobe Consulting will look at two problem spaces — customer enrollment and correspondence management — and show how to create innovative experiences with Flex, AIR, and LiveCycle ES by leveraging freely available Solution Accelerators.

This session explores the SCA work at OASIS, including bindings to Java and similarities with LiveCycle ES in methodology. Those involved with enterprise architecture will find this session of particular interest.

Service-Oriented Architecture for the Enterprise

Attend this session to hear an examination of the OASIS Reference Model for SOA and a discussion of concrete service architecture work. We will relate the concepts of the model to concrete implementations. LiveCycle ES will be used as a case study for implementing a full-blown services platform for facilitating automated business processes and working with human-centric business processes.

Doug and Ben rock it with SpatialKey

I came across what might be the most efficient Flex mapping application on the web, launched by the Universal Mind geniuses and others like Ben Stucki, Andy Powell and Doug McCune. It's called SpatialKey and the technology preview release just came out. This is a product doing fully client-side heatmap renderings of thousands of data points and can do up to about 100k completely client-side. The architecture uses a hybrid approach and when client side loads exceed the 100K, processing moves to a server to do aggregation. 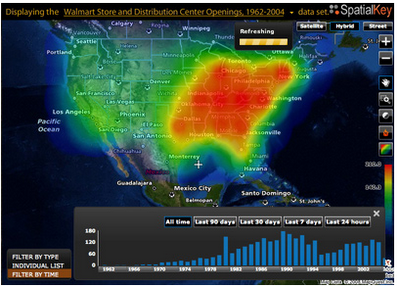 SpatialKey loads a ton of data into a Flex app and produces sweet visuals that tell a much better story about the data than looking at points on a map. They're only launching the client-side stuff as a "technology preview" while working on an enterprise offering that includes a database product. Potential use cases include deploying to police departments to handle their entire crime databases.

Doug wrote a much more detailed blog article about it here.
Posted by Duane Nickull at 9:02 am No comments:

"Virtualization giant VMware has joined the Linux Foundation, lining up alongside existing members like Adobe, Google and IBM, the organization announced Wednesday.

Virtualization, the ability to run software in virtualized containers so multiple OSes or versions can run on one physical machine, is becoming more prevalent in IT environments. At its core, virtualization is enabled by software called a hypervisor, and can help drive down data-center costs, among other benefits."

To me, this is an awesome development. I am about to add Debian to my VMWare list and am glad to see they are seeing the light. For those of you who have not tried Linux lately, it has come a long way. Awesome day today!!

Posted by Duane Nickull at 3:34 pm No comments:

Abstract: Adobe has released the Flex SDK open source under Mozilla Public License (MPL). This includes the source to the ActionScript components from the Flex SDK, the Java source code for the compilers, the debugger, and the core libraries. Flex can run in any browser—on Mac OS X, Windows, Linux, and AIR. This session will introduce people to Flex, provide code samples, use cases and a roadmap.
Posted by Duane Nickull at 12:47 pm No comments: