Every year I blog after Java One and recognize one company, demo, entry, exhibit that is better than all others. In 2006, this award went to a robotic Lego and Java demonstration. This is never an easy task since there are so many cool things at Java One. This year is no easier. After much internal debate and watching the "wow" factor from peopel seeing things for the first time, I bestow the 2007 Duane's World "Best in Show" award to the Java powered helicopter. Das ist ein sehr gute Hubschrauber! 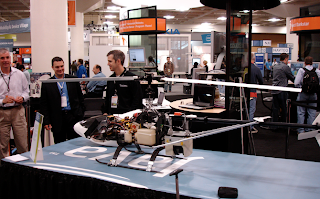 Runners up were the Sun SPOT (Small Programmable Object Technology) and the Quebec University students Java submarine. the latter failed to make tops given they have not yet included an adaptive algorithm to learn and re-program thrust bursts based on Causality Event Programming models (The thrusters usually over-compensated in attempts to level the device). While it is not "kinderspiele" (Child's play), it could be done with minimal effort. Quebec has a long history of great technology and good hockey goalies so I look forward to seeing what they bring next year.

Disclaimer: I excluded the Flex, Apollo and Java PDF code from Adobe.
Posted by Duane Nickull at 11:55 am