Having watched most of Tim O’Reilly’s keynote talk (yesterday) here at Web 2.0 Berlin, I had an epiphany ( I missed part of it to provide due ubersetzung (translation) between panicked O’Reilly staff and the sole German only speaking tech guy on duty for the keynotes). Tim really espoused that one of the core patterns of Web 2.0 is harnessing collective intelligence. This is a pattern whereby you collect the intelligence from many individuals and mash it up to create something new (product, website, platform, or whatever), based on the collective and collaborative best ideas and scrutinizing by all involved. So why does Tim get this? He didn’t invent the concept of developing things by committee and is far from being the only one who uses it. So why did he seem to be the first one to really understand it and explain it well? The answer is actually so simple it escaped me until now. 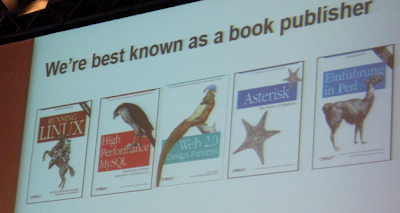 O’Reilly Media, as a publisher, has been using this pattern for years. It is implemented by making, refining and publishing books. When O’Reilly makes a new book, they use the collective intelligence of multiple authors, editors, technical reviewers and others who help package, market and promote a book. It is a textbook example of this pattern in action. Their collective intelligence makes O’Reilly books better than most others.

Design and Architectural patterns are really the basis for Web 2.0 in terms of defining it and distinguishing it from the first iteration of the Internet. During the general keynote sessions, many speakers correctly noted that patterns can be reapplied to other realms. You could use the same pattern (harnessing collective intelligence) for building a house, a formula one car or software. Getting collaborative input provides more ideas from which to select the final design and form.

The new O’Reilly book "Web 2.0 Design Patterns" discusses some of the key patterns, although it does not claim to be a complete or authoritative resource in terms of what Web 2.0 is. It was written for people seeking to understand what Web 2.0 is all about and the impact it is having on their industry.

As a book publishing company, O'Reilly has used this pattern in their design since first developing their process. This process is completely different from one in which a book is made in secret and released only when deemed ready. 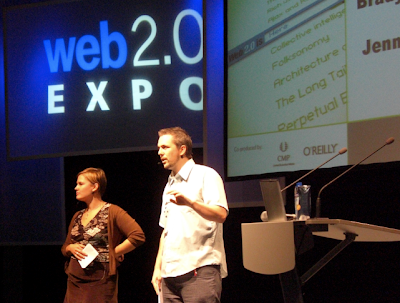 Jen and Brady on stage dealing with a ghost in the slide clicker
Some other Day 2 observations for Web 2.0 Expo Berlin? Brady Forrest and Jen Pahlka are working very hard to make this event great. It is no small feat and considering the diversity of attendees, they have done a stellar job. IMO, deserving of huge raises and toasts with good German beer. During the keynote session, there seemed to be a ghost in the room randomly advancing the slide deck to trip up Jen who handled it like a pro.
Posted by Duane Nickull at 1:07 am