Friggin Awesome! Sharks with Friggin laser beams!! A jam session in a sauna?

The 2007 Adobe on AIR Bus Tour is now on its third city stop (Portland). This tour will keep the bus driving all summer long so check it out when they come to your town. This is one show you don’t want to miss. It reminded me of my old rock and roll days touring in a metal band. Of course there are some differences.

First – the guys on the bus play Guitar Hero rather than real instruments. Kind of cool given the instant gratification but as an accomplished musician (you can download my latest music for free here), I couldn’t bring myself to try it. Besides, you need long hair to really be a guitar hero right? I seemed to have thought so back in the 1980s (yes - that is me on the left): 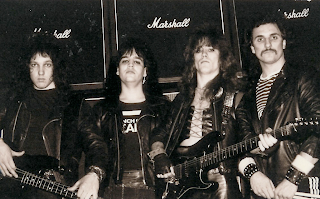 Second – they don’t have to lug Ampeg 8x10 cabinets, Marshall Stacks, and drum kits up three flights of stairs. Trust me – this is a good thing.

They also have bloggers and other new media rather than traditional paparazzi. The media shape of the world has changed forever. This is also a good thing.

Last night the bus stopped in Vancouver, my home town. The venue was pretty surreal. We were in a greenhouse on the third floor of a downtown bar. I am not sure what rocket scientist built this without air conditioning, but last night was very hot. Finnish sauna makers should have been there to take notes.

The crowd was awesome! Vancouver developers and architects came out in droves and stayed for the entire five hours. Even the girls at the bar got into the act. Here is one wearing a Nitobi sticker. 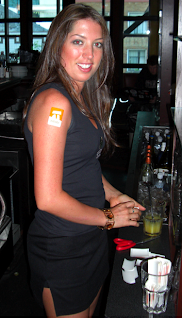 Before the event, fellow Porsche owner and Adobe Evangelist Ted Patrick took me up on my offer to let him drive my Porsche 911 Twin Turbo with all the Ruf accessories. As you can see by this photo, Ted now wants to upgrade his Boxster. Ahh – there is no substitute! Non-Porsche owners will not understand this. 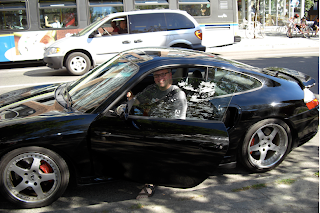 Anyways, the crowd on hand were awesome! Here is a shot from halfway back when a ton of people still could not get in the room. Standing room only. Mike Chambers, Kevin Hoyt, and Mike Downey all gave top-notch presentations which the developer crowd loved. Being on last, I was worried that there was going to be no way this crowd would stay here five hours but they did. 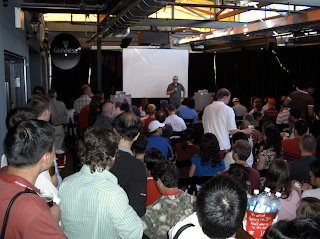 Then Andre Charland got up and blew everyone away. Nitobi's two demos and code samples include a Mac style dock with magnified apps built in AIR and a SalesForce.com offline AIR application with synch capabilities. The scary thing is both of these were written in so few lines of code. Andre is a genius and has the ability to consistently come up with clever little apps with his cohorts James, Alexei and Dave.

I am actually very surprised that Nitobi still exists as a stand alone company. I personally think they are the #1 acquisition target in the tech sector today. Profitable, on the leading edge, four evangelists and probably the coolest corporate culture in the industry ('Dre claims he got in 60+ days in Whistler last season ;-). DISCLAIMER: I am on the Advisory Board of Nitobi and have a financial interest. In the interest of transparency, I am following Redmonk's lead on my blog and disclosing any conflicts of interest to help readers come to their own conclusions.

Andre then proceeded to have several beers and make funny faces in front of cameras while showing off his new iPhone. 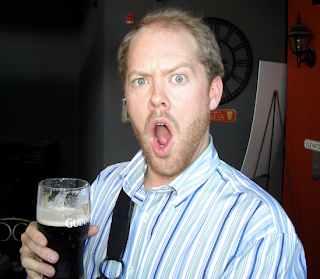 He was immediately joined by others: 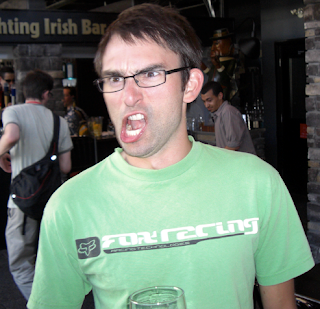 Eventually even Ross Ladell (Blast Radius) and Adobe's own Suzanne got into the fray: 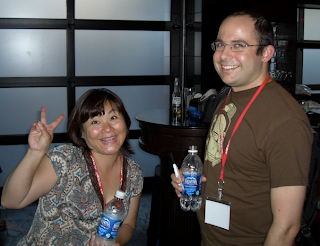 I'll leave it to your imagination what happened after a few more drinks in the hot greenhouse.

Anyways, I went on last trying in vain to measure up to the others and managed to squeak out a 20 minute summary on Adobe's technology platform architecture, showing its relevance to Web 2.0, SOA etc. As promised, the slides are available here. I only presented the first 15 or so due to time, but I will be recording a session with these later in the month for public consumption.
Posted by Duane Nickull at 9:55 am