NSA: The Good, the Bad and the Necessary

As a long time computer geek having stature amongst my friends as the techie within our group, I often get pinged for opinions about everything from which smart phone to buy to how much memory people require.  Occasionally, I get the highly contentious questions too like "Should the USA put Eric Snowden in jail for life?".  Some even advocate harsher measures for Snowden.  I saw this cartoon today which made me want to write a bit more about this subject. 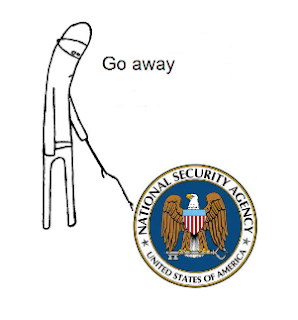 For those of you not in the know, Eric Snowden  is an American computer specialist who worked for the CIA and the NSA and recently leaked details of several top-secret United States and British government mass surveillance programs to the press.  I cannot speak for him but if I was faced with the knowledge he had, I might recognize that the general public might believe they have a right to know.   Coming to this decision, Eric Snowden made a lot of very secret information available to the press.   The full details on his actions are available here.   His motive, while noble and an earnest attempt to do what he perceived as good, have to be understood in context of the good that comes out of fact we have systems like this in place.  One only has to look back as recently as April 15 of this year to see that such systems may provide an immense benefit to society as well.

For the record, I am a Libertarian.  I don't want anyone to think I am fine with a government that can randomly start spying on me and fishing for data to see if I match any profiles that might be deemed anti-social.  I do see the advantages of such systems however when fast decisions have to be made following an incident like the Boston Marathon bombing on April 15th, that we have the data and connections to other data to quickly bring the culprits to justice.   Within moments of identifying the first bomber, these systems can correlate magnitudes of data and find those people connected to Dzhokhar and Tamerlan Tsarnaev.  The graph-like relationship to many of the people they interacted with has likely been the subject of great  discussions in various government offices.   What types of questions would have law enforcement tried to comprehend on that day?

- was the bomber(s) alone or are they acting is an alliance with some larger group?
- if they are part of a larger group or movement, who else is in that group(s)?
- are there any other event(s) planned for the near future?
- if there are, which one of the people they have been in contact with is likely to perform it?
- who else has read the same articles on the online Al-quida magazine as the brother?
- etc...

Knowing the answers to these questions allowed the police and other officials to understand who was involved, where to find them, who else they talked to and more.  Quite simply stated, the faster these questions can be answered, the greater the public knows they are not at risk (or potentially know if they are at risk).

Now comes the big question.  At what point do you trade some of you personal rights to privacy to be able to bring a swift end to things like the Boston bombings?

Each and every person will probably have their own answer.  To me, I just wanted to write this blog post to illustrate that the question of personal privacy is not as black and white and some make it.   I encourage each reader to ponder the right to personal privacy balanced with the need to share information to avoid events like 9/11 and Boston.