I am a BC Conservative Party member.  That is correct.  Moi!  Why did I choose this party over the Liberals and the NDP?  Simple.  I read their mandate and it makes sense for British Columbia.  I also respect the people they are running in the next Provincial election.  The  BC Conservative Party's guiding principles are easy to believe in.

The Party is founded on and will be guided in its policy formation by the following principles:

2. The BC Conservative Party believe in managing with the highest standards of integrity and transparency.  Again, an extension of the first principle, integrity in government must be absolute.  When you enter politics, you must accept from day one that you will make choices that offend some.  To be guided by an attempt to please everyone is ill-conceived.  As soon as pandering begins, integrity ends.  How do I know anything about integrity?  It started when I was very young and a family friend who was a politician influenced my parents.  He influenced the lives of my great Uncle Olaf Turnbull, who himself was an MLA in Saskatchewan for the Canadian Commonwealth Federation or CCF.  This family friend became the Saskatchewan CCF's leader and then the seventh Premier of Saskatchewan from 1944 to 1961. His government was the first democratic socialist government in North America, and it introduced the continent's first single payer, universal health care program.   He did this with integrity and conviction.  This was done before I was born but we heard stories of the man who had a dream, a vision and would not let public influence sway him from that dream.   That man was named Tommy Douglas.   He later was named The greatest Canadian by a CBC television program in 2004.  Here he is with my mother around 1970 (left), a photo of himself he gave to my late grandfather and a letter on the right he wrote to my grandmother expressing his grief that Russ had passed.  He also spoke very highly of my late grandfather, another man, like my father, of integrity beyond reproach. 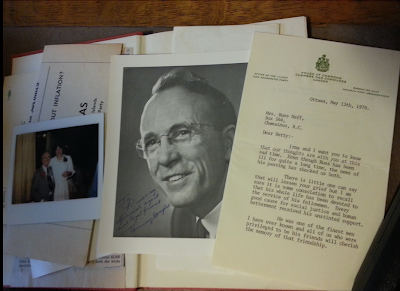 3. British Columbians are entitled to full knowledge of services rendered.  Again, full transparency in government is a right of those who pay for it (you and I).

4. The BC Conservative Party believe in the rights and responsibilities of all British Columbians and that governments at all levels are in place to serve and respect all individuals and their families, including freedom from unnecessary laws and regulations.  A belief that government is fundamentally in existence to serve the people is paramount to the parties mandate.  Part of that mandate is to respect the rights of the individual.

5.  Members of the Legislative Assembly (MLAs) should be empowered to best represent the interests of their Constituents.

6. A belief in restructuring the taxation system to maximize benefits for the greatest
number of BC citizens.