A logic fail is perhaps one of the most epic types of fails.   It resonates as funny to many who are not directly involved with the topic while often leaving the person who was responsible for the fail scratching their head wondering what it is we are all laughing about.  Take for instance the sign below from the Kamloops Zoo.  I was sort of smirking while asking about the free refills and the woman behind the counter asked me what was funny.  Needless to say we ordered three smalls. 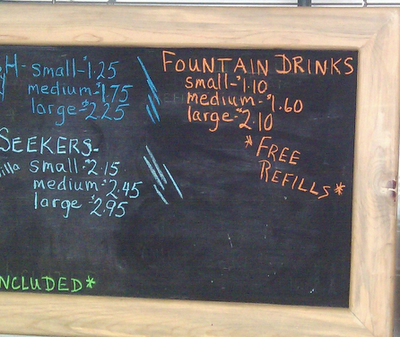 As mobile and wireless devices start to permeate our lives more often, these sorts of logic fails pop up now and then.  Steve Jobs noted in an early interview that architects of the telephony systems had made a fatal logic error by placing the tonal switch signals within the audible bands.    This allowed a rather fun activity called "Blue Boxing" which still worked in some remote parts of the UK until only a decade ago.

A logic fail often comes from architects building upon existing systems without discovering what is really there and questioning if something needs to be there at all.  Some very large logic fails have been recorded in recent time including the recording industry's belief that people will continue to buy music on plastic media.

Consider the Portable Document Format (PDF) forms as another example.  PDF is great for desktop, but rendering PDF forms on mobile devices is something that should not be done.  I get asked about this quite a bit and want to clarify some of the reasons.  People ask me how to do it because they already have PDF forms.  My answer is "don't do that".

PDF forms are first and foremost often designed to render on a desktop.  The layouts often use an X, Y coordinate system with form fields placed beside each other.  This is not the way most smartphones would render an interactive form.  Smartphones usually use a vertical flow to lay out form widgets over multiple "views".  Compare the two forms below.  They are in fact the same form.  The one of the left was developed and deployed to look like it's paper ancestor while the one of the left was built by Technoracle's forms platform ingesting a PDF form and turning it into a mobile friendly form. 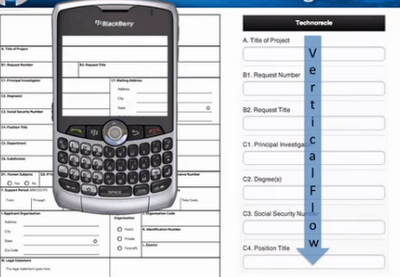 The logic fail here is also from assuming that the digital form should appear and render like it's paper counterpart.   This eventually leads us to believe that our earlier statement is correct.  The further out in any direction an architect goes without understanding the reasons for decisions in the underpinning technologies, the more likely that architect will fail at some point.

The fail in logic here was simply assuming that one should continue to use PDF for wireless and mobile devices.  This is simply not a logical path forward.  Aside from the layout issue, PDF forms are often bloated with much more information than is required for a mobile interaction.   Since the logic that handles things like tabbing orders, mouse hover events and window focus events is not required, using them on wireless eats up CPU and bandwidth, ultimately killing the user's battery and data plans.

We are in pre-beta right now with this technology but are already round tripping data to and from PDF forms to mobile devices.   It will not be long before we declare a public beta.

Posted by Duane Nickull at 6:00 am