I have always been a bit of a mathematics fan and I work on various algorithms. Some of the recent ones I have been working on in private are a combination of academia and new age philosophies. I decided to apply this in practice to the lottery so in January 2010, I used a filter to analyze and work on numbers that have a higher probability of being generated based on an evolution of Chaos Theory. The results are somewhat significant and shown below.

For those who are uninitiated, Chaos theory is focused around "order from chaos". I live my life in total chaos and find myself thinking about it a lot. Is Chaos really Chaos or is there something else? While many had pondered the theories of Chaos, Edward Lorenz, a meteorologist, is generally credited with the first experiments around 1960-1962. He used a computer to digest 12 distinct models for predicting weather. The experiment predicted what the weather would be, although not accurately.

I have believed that Chaos itself is just a pattern that we have an incomplete understanding of. For example, if you look at weather patterns, is it possible that we are missing some key criteria or have failed to understand a vector that affects the weather? Such forces may be difficult for humans to comprehend. The Butterfly effect and small variations in initiating conditions could explain much chaos. This leads me to my next thought.

What if there are certain types of brain waves that affect physical matter? I know this sound crazy but let's just explore this for a second. Such a possibility has been contemplated in conjunction with the chaos theory of lotteries before and dismissed. The idea goes like this. If enough people concentrate on a specific number, that number is more likely to be a result in a lottery. Of course, this theory would have to be balanced by assuming that the population that is thinking of equally random lottery numbers, yet this is not the case. There are numbers that are significant to various segments of the population in different cultures. Asians love the number 8, North Americans generally think 7 is lucky. Religious people associate God with the number 3.

Many lotteries that have a game whereby the numbers are selected from 1-49 inclusive have statistically significant patterns in drawn numbers based upon these theories. These are small enough to potentially make a difference yet likely not large enough to establish a winning hypothesis. Statistics can be found at http://www.lotto649stats.com/

I basically reviewed a number of lottery results and applied a filter towards shifting number significance based on cultural events. This was factored into a statistical draw model and factored in modification weighting based on current events in a confined geographical area. Think of it as an experiment to debunk the claims above. The results were interesting yet not a net positive outcome. Here is a snapshot of my lottery account in January 2010. I basically won a lottery prize every single draw using my algorithm based on buying 5 tickets boxing several combination of projected numbers. The odds of winning the grand prize once are one in ~14 million (not including the extra). The odds of winning a smaller prize based on 3 out of 6 numbers correctly drawn is about one in 12,000. To accomplish this every single consecutive time or to hit an extra number is not astronomical yet I would aver it is significant. 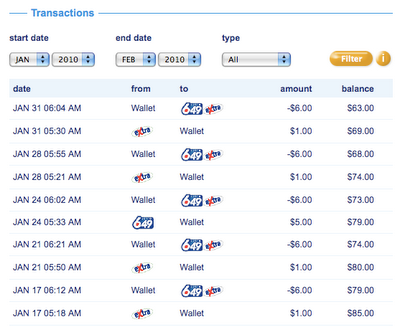 Having stated this, I do not expect this will yield any big results as the theory itself starts to destroy itself due to it's inherent flaw.

Either that or this is all just a crazy coincidence.
Posted by Duane Nickull at 9:28 am