Automobile "Bait and Switch" advertising alive and well in Richmond

My wife and I are hunting for a new car to replace her now sold Land Rover Discovery. We used AutoTrader.ca, a great site for finding cars after doing all our primary research on new cars at thecarconnection.com. We had settled on the Nissan Xterra as our first choice to investigate and found that Richmond Nissan had 5 Xterras advertised as available for sale (I printed out the paper with vehicle stock numbers and cars available the same day as we went to the dealership).

LOL - when we got there, not only were the salesman not able to find them (claimed they only had one left), they immediately mentioned the new model (2009) is on sale. This is after we packed the whole family into the car for a 45 minute drive to the lot.

Bait and Switch is an illegal practice in British Columbia and I urge anyone who visits Richmond Nissan to call them first to keep them honest. Dishonest cars dealers are not good for the reputation of the brand nor do they keep customers happy. Even today, they are still advertising 5 Xterras they do not have for sale. (Note - this link will likely not reflect the state of Sunday, January 25, 2009 as time passes so the image is posted below). 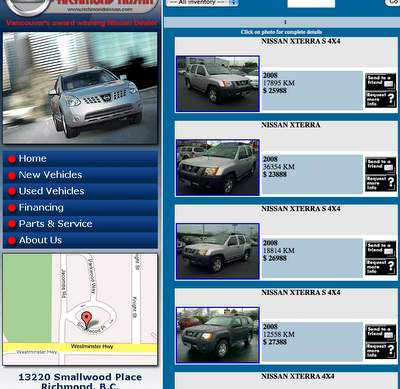 Luckily, we happened to venture across the street to the Toyota dealership and took a peak at some of the new Toyotas. We decided on the 2009 Toyota RAV4 7 passenger. This car had been on my radar from The Car Connection but we had favored the Xterra as it had an overall rating of 7.8/10 vs 7.6/10. Nevertheless, after seeing both cars, the RAV4 beat the Xterra is several categories. Most important aspects were 7 seats, factory ski/board racks, 37 MPG highway (the costs will pay for itself over the Land Rover in gas savings at $1.28/litre) and drive-ability. The on-demand 4-wheel drive is an important feature too for the trip to Whistler next month.
Posted by Duane Nickull at 5:53 am