I recently became aware that despite attempts to educate people to the contrary, the term "Web 3.0" continues to be used. It is only natural I guess given we use the term "Web 2.0". I do believe using either term in a purely literal sense is flawed as the convention is to use this to denote major version changes to a thing. The web is full of change but it remains incremental. To my knowledge, there has never been a wholesale, overnight, non-backwards compatible change to the entire Internet. I highly suspect Tim O'Reilly used the term in the exemplar context rather than as a literal term. Nevertheless, it seems to have run away now on its own. Let's examine why it is flawed as a path for the web community.

The Web 3.0 zealots claim that Web 3.0 is everything Web 2.0 is plus semantics, a ludicrous claim given semantics are ubiquitous, whether explicit or not. Semantics exist today. From a pure logical standpoint, making such claims is meaningless. Nevertheless, I believe it will persist. To begin with, I decided to check with Wikipedia on a definition (despite the fact Wikipedia has become notoriously inaccurate due to tin-pot dictator editors who delete factual elements and replace them with their views). I was surprised to see my friend John Markoff as being credited with the definition. At the time I write this, here is what it alluded to:

"Web 3.0, a phrase coined by John Markoff of the New York Times in 2006, refers to a supposed third generation of Internet-based services that collectively comprise what might be called 'the intelligent Web'—such as those using semantic web, microformats, natural language search, data-mining, machine learning, recommendation agents, and artificial intelligence technologies—which emphasize machine-facilitated understanding of information in order to provide a more productive and intuitive user experience."

Let's start by ripping this apart. Semantics is the "meaning" of something. Like architecture, everything that exists can be linked to it (everything has an architecture, whether explicit or not). There is a triangular lexicon of the major concepts in most semantics work which includes the Referent (the object in question), the Term (the name or symbol representing the meaning and linking it to the referent) and the Conceptual domain (the place where meaning exists). There is also a fourth dimension of semantics which is a contextual plane. This is the set of circumstances that surrounds an object in question and can affect its meaning and importance. 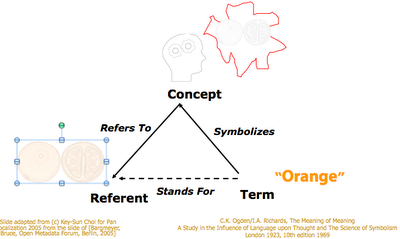 Most semantics work gets stuck in the label region. It really should be done in the conceptual domain, which is the focus of ontology work. During the presentation I gave at Web 2.0 Expo earlier this year entitled "Ontologies for the Enterprise", this was explained (there is a link to the slides).

Since the objects and labels exist today (plain English is a natural language filled with terms or labels for just about every referent that exists), we have the tangible parts of the Semantic Web today, hence there is no logic behind advancing the version number of the web to Web 3.0. I think Tim has stated himself that it was a bad idea to name it Web 2.0 as it leads to this kind of foolishness and (I would presume) that "Web 2.0" should not be taken literally as so many have, but only in the exemplar context. What we need to concentrate on is the Conceptual plane's ontology work. While a lot of this does exist today, making it more explicit and providing concrete interfaces to such work is where semantic web work should be focused IMHO.

Some of the other elements cited in that Wikipedia entry exist today, including microformats and natural language searching. Google and Yahoo are both very competent at searching (when was the last time Google could not find what you wanted?). Don't get me wrong - John Markoff is a true genius and I deeply respect him. I think what I can infer is that John summarized what he noted other people have used the term to describe.

Web 2.0 is a collection of design, architectural, social, and business patterns implemented over the Internet. Some of these patterns deal with semantics, microformats (Small Things, Loosely Joined) , computational intelligence, data mining, and more TODAY! The pattern of "the constant beta", a pattern whereby continual, incremental innovation happens, ipso facto denotes that no further version numbers (like Web 3.0) should ever be used as the Web embraces the notion of change at its very heart.

I vote that the web community never version the web with 3.0, 4.0, and so on unless there is literally a non-backwards compatible version of the Internet invented. That is my $0.02 CAD worth!
Posted by Duane Nickull at 9:31 am